I DON'T CARE IF IT'S "E" or "F"
-
"Because it's all Skip to me..."
-
Yes, we've heard it all - The Sunspot cycle has bottomed out and "SKIP" is dead....'Long live Skip'.
-
But we're talking "F" layer, and I don't care what alpha letter is involved (A-X) if there's Skip, then...there is Skip. About two months ago "Sporatic E" Skip started. SPORATIC = Intermittent, yet everyday for the last two months I've enjoyed Day long Skip, usually fading out around 1-2 a.m. Perhaps we should call this "Daily Sporatic Skip".
-
The range isn't as great, yet offers contacts not usually associated with "F" layer DX, and it's quite enjoyable. So, until Mr. "F" returns, the youngster "E" can stick around for the enjoyment of us all, and that includes 10 AND 6 meters (for the HAM in us). I've had rigs with six meter capabilities off and on for about 15 years but have yet to actually use it - Either I had both rig and antenna and the band was dead or, like now, band open and no antenna. This year is moving along at a pretty fast pace and so I'm making plans ahead of time for this fall when the temperature isn't so bad for putting up antenna's. Of course, if I ever opened my Yaesu FT-817ND box, I could run QRP portable from work.....if it wasn't so damn hot and humid (and the deathwaves of August haven't even arrived yet).
- 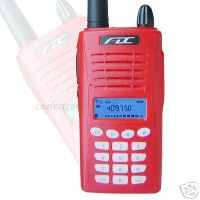 FD-150A Professional Ham Radio
RED Lovely VHF 136-174MHz
-
"Red Lovely"???? Oh the pain....
(Yes, Ebay auction I saw)
-
AND SPEAKING OF EBAY...
-
Have you noticed that the frequency of picture piracy has increased quite a bit? I've seen several rigs that appear for auction, using the same picture from another auction without mentioning it to potential buyers. I don't have any problems with sending them an e-mail, but they don't seem to see the problem with it. How do you feel about this?
-
Recent auction prices seem to indicate that there is no decrease in the demand for older radio gear and accessories (ed. - Perhaps "MADE IN JAPAN" is part of the equation. I don't expect the same in 20 years for the "MADE IN CHINA" crap). CPI's as always fetch a stunning final bid, but I am a bit concerned with the number of "EBAY SHOPS" cropping up. When buying a rig, I really don't want to read: "The person who dropped this off said it worked the last time he used it". Note to Ebay shops: If you're going to sell radio's at least pick up a 12v ps, meter, and dummy load to do minimal testing.
-
Shipping Fee's are another sore spot on Ebay - I see more price gouging going on. For instance, I was going to bid on a handheld (actually, I was going for the buy-it-now, as it was reasonable) and then found that it would cost me twice the buy-it-now price to have it shipped to me, from a US location. I wrote and pointed out that they could go to the Post Office and pickup a Priority box with a firm ship price of $8 - they weren't interested. I didn't buy, and was amazed to see it (according to their figures) was only $3 more to send to Italy).
-
Catalog collecting is still with me - especially the older Allied and Lafayette catalogs from the 30's-early 60's. Some of the earlier ones are so imaginative that I've been scanning them and doing some re-touching so that I can get them printed out in both 8x10 and 11x14 sizes for framing and then wall mounting. I haven't quite decided which one is my favorite (because I don't have every year yet, thus, I don't know what I'm missing as far as artwork goes.)
-
"CLEAN LOOKING RADIO"
(According to EBAY seller)
-

Les wrote in about a Messenger 215 (business band) and he could use a schematic - Anyone have one?? If so, e-mail him by clicking on his name below.
Hi,
I stumbled onto your site while doing a google search for a radio I just acquired.
Great site by the way.
I have a Messenger 215 that I just picked up the other day and am soon going to start the process of restoring it but in the mean time I have been trying to find the Operator/service manual for it or at least the schematic(I like to have as much info as I can get to keep with my radios so that anybody that may get my prized stash in the future will have documentation on them)but have not been able to come across a single thing about the Messenger 215...its as if it never existed?

My trustworthy Cobra 2000 bit the dust (ed. - moment of silence please) last month and I sure miss that Noise Blanker!! Lucky for me I picked up some 2000 parts, including the PS (which is where I believe my problem to exist), so it's just a matter of man vs. couch potato farming to get it repaired. I think I know myself well enough to where I'll pull it from the shack desk and save it for a winter project.

Living in Texas (especially so close to the Gulf) tends to make that last statement rather hollow because we don't really have a winter, much less one that keeps us snowed in. I remember living in New England and having plenty of time to work on various repair projects, but when you're still mowing the yard in December it's kinda hard to do much about it (along with not being able to take a couple weeks vacation off either). If you don't live here now, take my advice and never even let it cross your mind. If you're not battling the heat and humidity, you're worrying about Hurricanes and/or Tornado's.

I heard on the broadcast radio today (I think NPR), that Sugar Land was 6th for being one of the better places to live in the U.S. and I had to wonder just who makes up these lists? I work down there and I can't tell ya how many missing-turned-up-dead women are in the news, along with home invasions, etc. Maybe 10 years ago it fit the bill but sheez, I don't know about now.

Okay, my fingers are worn out and I'm sure your eyes are too, but it's almost a month since my last posting, and hopefully I'll get back in the groove of writing now that I'm relatively healthy again.

What I consider to be probably the BEST race movie ever "Grand Prix" has finally made it out on DVD (2-disc set). Just like CB had it's "Golden Age", so did racing and this takes place in the 60's, and if you haven't seen it, I highly recommend it - Hell, it's only about $15, and runs around 3 hours. The digital touch-up makes it look even better! Woody sez: 5 outta 5 stars.