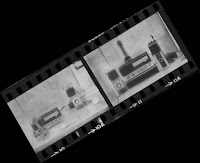 What do most of us use our HTs for? Talking on a repeater, operating at a hamfest, and emergency communications. That is... when we use one. I can't remember how many used equipment ads for various HTs that started off with: "I thought I was going to use this for [insert reason here], but actually I only used it once or twice and it's been sitting in the shack for years". Over the years there are literally thousands of used HT ads from eBay, QRZ, and QTH.

The 2 best HT's you can own are: 1). The one someone gave you, or 2). One of those sitting-in-the-shack models at a great price (and honorable mention goes to the much maligned Baofeng, which offers some dirt cheap models. I own one of these, a UV-R5, and it's ten years old now with an original battery that still holds a charge for hours).

My 2nd HT is a Kenwood TH-D7A dual-band analog HT with everything you need inside it to use it for APRS. As well, this unit is the one the you could connect to a Kenwood TS-2000 and run remotely. I bought it, the battery pack, an AA battery pack, desk charger, and Kenwood's PG-4W software and USB cable for $130. The seller told me that the rechargeable pack still held a charge, but only slightly over 90 minutes. It works great! I bought a 3rd party rechargeable battery off Amazon for about 30 buck and I've been very happy with it.

Everything written above is a preface to the main title of this post, but I wanted a little background before I begin the meat of this story.

The year was 2019, and Kenwood's top HT the TH-D74a was a decent seller, it had only been introduced in 2016, and it was the grand pappy of my D7A. The TH-D74A was a tri-bander, with APRS, both analog and digital (DSTAR), modern features like bluetooth, and it came with a beautiful color screen.

The downside to all of this was it's lofty price, in the mid-$500's. Personally I wouldn't spend over $500 for an HT, but I kept my eye on it because every month or so the D74 (along with many other models) were either sale priced, had a manufacturer coupon, and most rare of all - both sale price and manufacturers coupon. So whenever they got into the mid-$400 range I was almost prepared to get one, but considering how little use my old D7A got, I'd always talk myself out of it.

Shortly after the New Year, and going into January and February, COVID-19 reared its ugly head and as we all know, really screwed with finances as well as Hamfests (they stopped). My wife was sent home in March and worked from home for months. Rumors of problems with supply chains continued to persist, so in July 2020 it was a whole different world.

It was around this time when I began to notice that most, if not all, ham radio stores had stopped discounting their products, and manufacturer coupons had all but dried up.

A peculiar thing happened to the D74A though - even as its list price rose, but they were very hard to keep in stock! In a few instances I'm aware of, 2 new hams jumped from having ZERO radios to paying around $600 for a D74A, adding a few accessories, then sales tax, so these ended up being $700+ purchases. With a little more thought, or guidance, a ham may have bought a Yaesu FT-991a, or an ICOM IC-7100 (the 7100 maintained it's $700 price range for several more months until it too saw its manufacturers suggested price rise to where it currently sits: $1095.95), or heck... A Yaesu FT-818. Put a dual-band antenna on it and you have your HT along with a bunch of other features!

Another cruel hand was dealt on October 20, 2020 when a fire broke out at a plant owned by Asahi Kasei Electronics Co., Ltd. (and Asahi Kasei Microsystems Co., Ltd.). They made digital sensors, LSI's and even supplied the TXCO used by several vendors. These parts were not obtainable elsewhere.

Subsequently, on December 24 2020 Kenwood announced the discontinuation of it's premier HT, the TH-D74A. -

"JVC KENWOOD Corporation announced on December 24, 2020 that it will complete production of the 144 / 430MHz band D-STAR compatible handheld device "TH-D74" on its official website in December this year. The reason is not clear. Optional items will continue to be available for purchase and will continue to be repaired and supported. It was also announced that the company's amateur radios other than the TH-D74 will continue to be produced as before."

As we entered 2021, COVID-19 was still with us. Hamfests continued to cancel themselves, and the D74A (or whatever stock could be found) continued to sell for an artificially high price, compared to where it was in 2019. In Fall of 2021, all we heard on the news was about the broken supply chain, ships sitting off docks for weeks or months, and ham radio prices remained high; not falling back to where they were only two years ago. Users who had bought the D74A's were trying to sell them on the used market, hoping to recoup their money, but there weren't many takers for a used HT with accessories in the $700 and up price range. I fell a tad sorry for those who had to sell it and lose hundreds, as well as those who just kept it.

As this article winds down to it's conclusion, IMO I have several thoughts: A $700 HT still isn't worth $700 (unless that HT has not only VHF-UHF, but HF as well), and I can't point a finger at the ham radio stores (yes, I can, but no, I won't) for selling equipment either higher than they were two years ago, or holding fairly insignificant sales (i.e. - "Buy this rig and get a free hat")

Unless these stores were getting stiffed with higher wholesale prices, this is probably one of the few times in their history where they could make serious money, and not bread crumbs. Profit on the typical $1000 ham rig is less than $25 with their bread and butter being service, and accessories. I'm happy that they may be making more off equipment than they were in 2019, because we've seen too many radio businesses fold.

BTW, it's all not doom and gloom - A small amount of manufacturer coupons have returned! 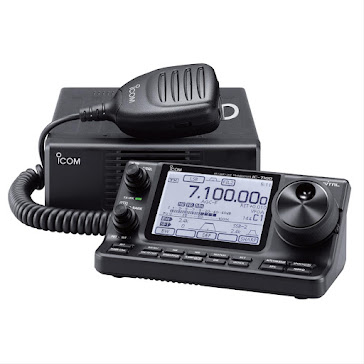 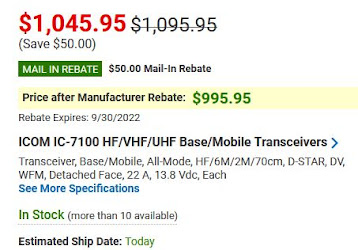 I really like my D7A, and there have been a few HTs that caught my eye from time-to-time, but never an HT for over $500. 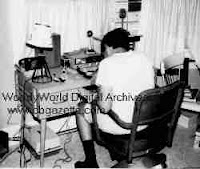 Posted by The Stoner Guy at 1:53 PM No comments: