RITA
PART TWO
FRIDAY NIGHT-MONDAY
Fortunately for us, but not others, Rita took a wobble to the East and except for some strong winds Fri-Sat-Sun, we received little to no rain. I was confident enough by 10p.m. Friday night to hit the sack! The XYL wasn't so happy about that but I told her that "I was sure that the sound of crunching wood and her anguished screams would be enough to wake me up...."
I've since then learned to enjoy sleeping on the couch..
Saturday morning -
Once again, a long line of cars waiting for gas.
I've heard from a few folks who mentioned that Sealy wasn't that friendly, noting signs up on the GAS signs visible to freeway travellers that said "No Gas, No Food", but once the deluge of people got out of here by Saturday night, the place was a mess. My Son's girlfriend, who works at Walmart said that people just used the sidewalk as a rest room, complete with something that worked as toilet paper and left it for the staff to clean up when Walmart opened later that day. There were other examples but that one will do. I managed to get gas on Sunday afternoon so I felt more comfortable about driving into work on Monday to power the servers, etc. back on.
In summary: it wasn't the best of times, and not the worst of times (physically), it was only perceived to be the worst of times, thanks to 3 weeks of Katrina coverage, no gasoline, long-stagnant lines of traffic, etc.
TALLY
Pwr loss in Sealy=Zero, my brother in the Northwest part of Houston lost pwr for about 12 hours, and my dad lost his for about 10 hours (North houston) + my son wants to keep an SSB station at his place now!
'Nuff
Said
Woody
Posted by The Stoner Guy at 10:31 AM

RITA -
PART ONE
Greetings from the Gulf coast of Texas! As everyone is aware, Hurricane Rita is one big storm and landfall is projected tonight thru- tomorrow predawn. As you've probably seen, there have been major traffic tie-ups and little to no gasoline along these routes. This will be an ongoing multi-part blog entry, but here's what has happened since Wednesday -
Around midday on Wednesday our company decided to close down on Thursday and Friday to allow for folks to take care of their families. I started backup procedures around noon, but many were not complete so I knew I'd have to come in the following day. Traffic going home was heavy, approx. equivilent to a 3-day weekend, and lot's of people going out of town. I'm talking about the I-10 West route, from leaving the Houston Area to where I live (approx. 50 miles West of Houston).
THURSDAY
Thursday morning I left around 9 a.m for work (Sugar Land) and found bumper to bumper traffic going West Bound, with many cars off to one side of the road for lack of gasoline. This didn't look good, so I thought I'd take my backup route (359 at Brookshire) to 1093 and then follow it to hwy 99 and from there into work.
Once off the freeway and onto 359 I saw an immediate backup in the Northbound lane heading for I-10. When I got to 1093, it was probably the worst I've ever experienced traffic along the route (not for me mind you, as I was driving towards town and not away from it). Cars were stopped, people were standing outside there cars either trying to get a connection on their cell phones, or just staring ahead at what seemed like an endless line of cars. Gas stations were full of cars, but these stations didn't have any gas to offer - these people couldn't go any further so they either drove or pushed their cars to the pumps should some gas evdentually arrive.
This backup on 1093 was almost bumper-to-bumper from Fulshear to the junction of Hwy 99 and 1093 (about 10 miles). I didn't have any problems getting to work, and avoided a route that took my by many gas stations because of the traffic tie-ups surrounding them. Points of armchair quarterbacking: Police should have been at the 359/1093 junction to direct traffic in a more timely fashion than the fixed timing signal lights allowed, as they were in Brookshire! (Smart going and kudo's to you on the force in Brookshire).
I took my time collecting data because until traffic was flowing, I had no inclination to get out in it - I'd already seen the stories of people who spent 3-4 hours just to move six miles, and of another family that spent 10 hours on the freeway just to get from South Houston to North Houston.
Evening came as traffice reports and traffic cams indicated I-10 was still a mess by 8pm, but I thought I take a chance on my 1093 route and hope it was better than earlier in the day. Servers were shutdown, and I grabbed my sack of data and left for home.
1093 was virtually empty and I got home in about 50 minutes which was excellent for my 52 mile drive. When I arrived in Sealy I found "Gas Station Ghost Towns" where the Stations had closed, long ago running out of gasoline to sell, yet were filling by dark shadows of cars and people, and the occasional light from a cell phone.
FRIDAY MORNING
I woke up about 7 and found the street in front of me filled with a line of cars that didn't seem to end - people waiting for gas to arrive. I'm guessing most of them were from out of town. My wife Michele said the line began very early about 3 or 4 a.m. and it's almost 11 a.m. now , and while the cars and faces have changed, the endless line of cars have not. Some people seem "Fresh" while others show the strains of 24+ hours of travel (if you can call it travel) on their faces.
During the daylight hours 14.325 (frequency) is a good one for recent hurricane info. I'm spending the morning making sure the extra batteries are charged for the notebook pc's, cell phones, ham radio's etc. And plan to drop off some old CB walkie-talkies (the good ones: heavy like a brick with 4-5 foot antennas) with my older Son and his girlfriend, and over at my mother-in-laws house so that when cell phone become hard to use (very easy) and should land phones quit, we'll still have some time of communications between the three locations. There is no telling what we'll get in the way of winds or tornado's, but it's better to be ready than not. Enough typing for now - Look for some photo's on a later post -
73
Woody
Posted by The Stoner Guy at 10:17 AM 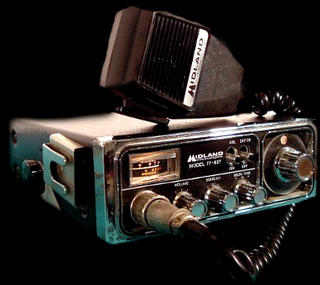 If you find yourself in a herd of CBer's, it won't take long before conversation turns to the radios themselves, and specific nostalgic stories related their favorite rigs of the past. Usually the brands discussed are the ones we all like to talk about: Browning, Tram, CPI, Stoner, Cobra, and President. One should not forget, ignore, or otherwise blow-off "Midland". Granted, they didn't actually make their own radios, but Midland rigs played a big part in the CB "Culture" (C.W. McCall signature radios for instance) by not only being popular, but priced within the reach of the everyday CBer.

Midland radios were stylish, inexpensive compared to their competitors, and while they had some shortcomings, if it wasn't for Midland CB's, it would have taken me a lot longer to get onto Sideband!

I was really itching to get onto SSB. Unfortunately SSB base stations were freaking expensive around 1970. Being a typical teenager, the "neat factor" played alot into what was catchy to the eye - for instance Regency's Imperial II DSB base was something I (at first) set my savings towards. It wasn't until I read up on DSB that I realized I wanted SSB, not DSB (no matter how cool it looked). There were several base rigs to choose from, but they were usually in the $450-$1000 range (much too expensive for a kid who worked in the Tobacco fields during the summer). However, Midland's 13-880b was within my reach at a totally unbelievably low price of $219.99!! And to correct myself: I really enjoyed that rig - until my neighbor with his PDL-2 and Browning came on-the-air. The Midlands frontend would shut down, and I'd be forced back on AM, using my E.F. Johson 124, which had much better protection against neighbors who lived too close... 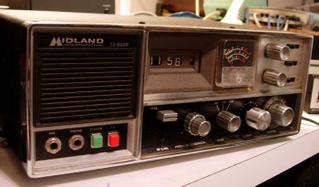 This rig had an almost identical twin in the 13-885, which was rated at a higher wattage (the 880b was a 10 watt transceiver). I really enjoyed sideband with this rig - not only did it sound good, but it looked cool.....

Besides being less expensive, they (for the most part) kept cosmetics consistent - Black and Chrome, with only the number of knobs to distinguish each other (Sometimes it was hard to tell which radio was which because they looked so close!

The 13-857 (pictured in the upper right corner by the title) was one such of those infamous black and chrome rigs. I still have one, somewhere. It's beat up, ugly and scratched with paint spills on the cover, but it was always ready to work during trips when I had no other CB to use.

I've also owned the 79-290, which was a good vacation rig. Living where I do, it wouldn't make a good daily traveler due to the front end overload and splatter, but I made several memorable QSO's with it during it's years of service.

So what was YOUR favorite Midland?? Shoot me some email and let me know!

BEAUTY IS IN THE EYE OF THE BEHOLDER
This can be said for many things, but as you, and I peruse the many pages of used equipment on EBay, sometimes you really have to wonder about it all. For example, the picture below: 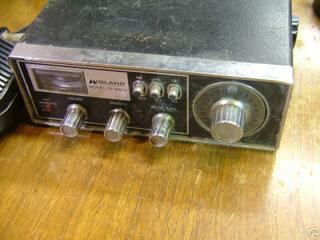 I believe this was listed as either good or excellent cosmetic condition.

It makes me wonder what "Bad" condition would be...

Not much going on around these parts (as in dx conditions), but hope is around the corner with the seasonal fall frontal systems which should be along any week now. Usually one of the first cool fronts of the fall coincides with the Belton Texas Hamfest, which will be October 1st this year. Belton is far enough from the coast to have a tad less humidity, and if a front blows through a day or two beforehand the conditions will be perfect for Hams and CBer's alike to walk through the aisles with erect wallets...

RAY NAGIN RADIO INTERVIEW
I don't know how much play this interview is getting but it surely tells the tale of the New Orleans disaster, and frayed nerves....
Woody
Posted by The Stoner Guy at 12:05 PM No comments: