ANOTHER "SK"....
-
-
We see, and hear of silent keys every month, some months more than others, some call signs register with you more than others. This past Sunday, W5MET became a silent key. Everyone in HAMdom knew him as "Frank". In the old days on 11meters we knew him as "Big Frank".
-
Big Frank lived just north of me in the early 80's when I lived in North Spring, Texas. At that time, he was the only guy I knew who was running a ham rig on 11 meters. I think at that time, I was using the Uniden Grant (pre-XL), or possibly a Hy-Gain V w/VFO (can't remember). What I do remember was Frank's impressive signal and audio, and that he worked for the now closed "Federated Audio/Video". He and another radio friend, who lived just a few miles from Frank (Steve, "The Voice of the Woodlands") were often cronies in various hijinks that occurred on the airwaves.
-
Later, when I existed in Sealy Texas I heard a familiar voice on a local repeater, whose name was Frank and took a stab at a QSO. Yep, it was "Big Frank", and we had a decent conversation that lasted my ride home. We made plans to try and get together on-the-air again, and perhaps at a local hamfest, but that was about 10 years ago, and well, we never did.
-
From what I hear, Frank died of a heart attack, and many of us (11meter/HAM) are just hearing about it. It would have been nice to get another QSO with him, but then, that's what happens when you put things off...
-
73, Woody
-
Posted by The Stoner Guy at 1:45 PM

While they haven't jumped as high as expected, the sunspot numbers are gaining strength (Obama could only wish for his numbers to do the same), and from what I've read via K7RA's Solar Report, and other sites like "Space Weather.com", we've being doing pretty good for the last 3 months, with no reason to expect more of the same. On Space Weather's site I saw that there was a change of rain (medium sized solar flare), so let's see what happens.

Woody
Posted by The Stoner Guy at 1:12 PM

ANOTHER DAY, ANOTHER REPAIR 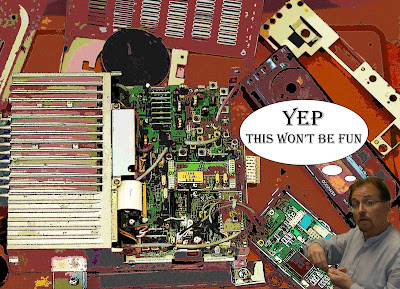 Perhaps older units in condition like this indicate an upwards movement in CB collecting? I guess I'll watch it and see if sells.

Yep, time flies by and the next thing you know - it's Ground Hog day once again! I'm holding the sunspot ground hog and it saw it's shadow, which indicates a rise in Sunspot's (ed. - 'bout time).

Someone wrote me about a month ago looking for a "President" hand microphone. If you happen to read the blog today, this may be the one you were looking for: 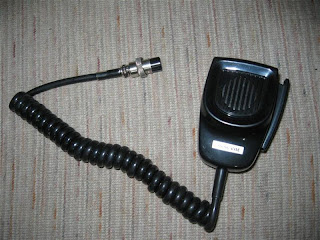 Both 11 AND 10 meters are open this morning, so fire up those rigs and do some talking!!