It was a hot and humid day in January, no different than any other winter in Houston, when, while scrolling through E-bay at work (Lunch time only of course) she walked into my life....."Help Me" she pleaded, "I don't remember who I am". Well, this was the first time a radio didn't know what it was, so naturally I was intrigued. I was also intrigued because - I'd never seen one like it either. Being the go 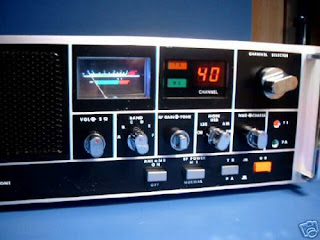 od detective I was, I knew that there were many radios sold under different brands, some looking the same, some not...but they were identical inside.


The seller of this radio said the ps had a Uniden stamp on it, but nothing else inside was marked. I would take a guess and say "YES, it's a Uniden made radio" but from what country it came from was still a mystery! Not only were was is a SSB rig, but also had positions for AM, FM, AND CW. Of course, the typical a-f band switch as well. This would probably be one of the early "Rack-mount" designs. So, I'm grabbing my grubby raincoat and hitting the streets once again, showing the picture at every CB, RADIO, or Pawn shop I run across - unless of course one of you know? Is there someone out there that can put a name to the rig? Let's see....
-
Woody
Posted by The Stoner Guy at 12:02 PM No comments: