"FROM THE REALM OF 22A"
-
It suddenly dawned on me that a month has gone by since my last posting! Blame work, blame selling off some items on Ebay, blame that damn Cheerleader on "Heroes" (C'mon, SOMEONE save the world...p-l-e-a-se), but wherever it lies, at least I have a new posting for the second month of the year.
-
And what a year (so far) it has been. Microsoft released it's bloated cow "Vista" (finally), and not too suprisingly, they are sneaking out test versions of SERVICE PACK 1 for Vista already. At least they seem to find their bugs faster...As of the 23rd of this month, you can get a HAM license for voice on HF WITHOUT code. And to be honest with you, while I've heard some amateurs say "They'll ruin the band", after listening many nights on 75/80 meters, I can't tell too much difference between what I hear there, and on 11meters (an interesting side note - In listening to conversations it seems that I hear more younger hams (thirty-something) complaining about the no code license as opposed to the older ones. I've heard the elders say more than once "maybe it will help Amateur Radio more than anything else")...And continued indifference to Amateur Radio has me convinced that the court idiot is running the Kingdom of the FCC.
-
"THEY'RE THERE, BUT THE LIGHTS ARE OUT" DEPT.
-
Radio manufacturers are said to run on slim margins, and they probably pay big bux for advertising, so why not let us pay for it? I know, I can here ya saying "You've gone daft man", but I'm talking about some manufacturer clothing. Not the cheap-o hats they give out during "Dealer Day" (tnx TypoMan), but some nice wind breakers, and shirts with a tasteful logo on it.
-
I think it was back in December when I thought "Hey, it would be cool to have something that said "Certified Yaesu Nut" with a logo on it to where. So I started poking around and couldn't find any apparel on the manufacturer sites I visited (if there is, please enlighten me), and I think Yaesu, ICOM, Kenwood, Ten-Tec, and even Drake are missing the boat on this one. Maybe some genius in marketing is reading this now.....
-
FROM THE "WHAT THE HECK IS THAT YOU'RE TALKING ON" DEPT.
-

Occasionally you might see some custom microphones hit ebay. Usually "Custom" means: some other microphone element installed; for instance I bought a D-104 head with the HC-4 and HC-5 elements in it. But towards the end of last year, custom microphones took a whole new meaning when one fellow in particul

ar sold his collection. Backstory: It seems this man ran a radio shop at one time, and had a favorite customer who ran an autobody shop (I know, this is beginning to sound like "Hey, you got chocolate in my peanut butter"). The autobody guy sandblasted a number of different microphones and did some nice custom paint jobs on them, using high quality auto paint.
-
I

'm not sure how many of these he sold - there were quite a few and I was only able to buy a few of them, as many fetched over $200 each. The "BIG" sellers were the ones painted in "CAT" and "JOHN DEERE" color scheme

s. Several other ebay sellers posted a few of their custom microphones as well and all I can say is: If you have a friend in the auto painting industry, get something going, 'cause there's GOLD in them thar beatup microphones!!
-
"MOMENT OF SILENCE DEPT."
-
Folks, bow your head down for a moment of silence to reflect on the passing of Robert Adler, co-inventor of the TV Remote. Robert passed away at a nursing home at the age of 93. Not inactive, the U.S. Patent Office recently released his latest Patent earlier this month for advanced touch-screen technology.
"WHERE'S WOODY"
-
I get alot of mail from the Gazette's fervant fans wondering..."WHEN are you doing some more videos?" The answer, which explains my slipped disk, is "very soon" (i.e. - some are already shot, but in post-production). I guess I've been watching too many radio related videos on youtube to really think about cranking out some more. Whatever the subject is will be 1. Video and 2. PODcast audio of the video and I promise not to mimmick the shaking camera work as seen in some of the youtube clips. Speaking of which, I found a GOOD video about a Ham Radio Club's class. Check it out - maybe you're doing the same thing, or maybe you'll get some ideas from it...
-
FROM THE "CRISPY" DEPT.- 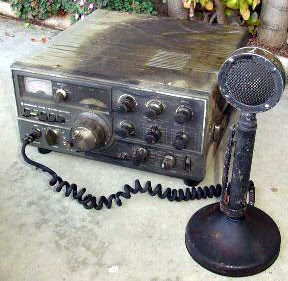