ARE YOU A FAN OF AMC'S

As﻿ I think I mentioned in PART ONE, I'm not preaching "Doomsday", rather preparedness. You should be prepared for a natural or non-natural disasters aftermath, hopefully coping better than those who haven't (prepared). Hurricanes, Tornadoes come to mind when I think "disaster"; telephone lines down, no electricity, cellphone towers damaged, etc. All of this, after a period of time, will be repaired. It would help to have some devices that let you know what is going on, and if possible to communicate with, along with staple items like food, water, batteries, generators, etc. But what about non-natural disasters, like an EMP?

You may have heard this term talked about before, or maybe not, so assuming "not" - "What is an EMP?" Well, first of all it's and abbreviation for Electromagnetic pulse, in other words a "Blast" or "Burst" of electromagnetic radiation. Check it out on wikipedia, books in your public library, or just GOOGLE it.

An EMP is born by an atomic bomb set off at a high altitude. The radiation emitted will wipe out every electronic device, rendering everything we know pretty much useless. We won't see it coming, but we'll see the results. To give you just a small look at the results I've compiled a short list, which should get the point across -
So now that it has sunk in, you realize this is not one of those things where life returns to normal very easily. With no transportation there will be food shortages, people fighting other people for water or other necessary items - in other words: the worst of mankind. We saw it happen in New Orleans, imagine it country wide...


﻿
﻿
I recall a manager of mine who built an underground storage/living facility on his property back in the 90's, and occasionally read about survivalist groups across the country that pop up in news stories, but don't grab that shovel just yet. There are a few things that can protect your electronics from an EMP, for instance a simple Faraday cage would work, and it's something you can make yourself. There are simple pouches that will act as a Faraday cage, and come in various sizes. I bought a 2-pack recently and plan to get a few of the larger ones as they aren't terribly expensive.

Your microwave oven is a Faraday cage, but if you had one, what would you put into it? Your cell phone? Nope, no cell towers or electricity to power them even if they worked, so a cell phone would not be a good choice.﻿ You'll require communications of some sort, so a all-in-one radio would be a good idea. Something like this:

"ARE YOU A SURVIVALIST?"


﻿
﻿ ﻿ ﻿ We hear about them, we read about them, but have you ever asked yourself if you were a survivalist?

The answer, of course, is that all of us are survivalists in our own way. Today, we work at jobs to make money which provides us with goods required to survive.

By definition via the Merriam-Webster dictionary we get:

sur·viv·al·ist [noun]
a person who advocates or practices survivalism; especially : one who has prepared to survive in the anarchy of an anticipated breakdown of society

"an anticipated breakdown of society.." - This falls into a wide scope, from providing for your family, to underground bunkers stocked with food and other items. Every year many portions of America becomes survivalists whether it be flooding, tornado's, hurricanes, heavy snow fall, or a failure in the power grid. The question is: "How many of you are prepared?"

Some of us may store some extra water, batteries, flashlights and perhaps a am/fm radio; but there is so much more you could do - just in case.

Even in the most usual type of disaster (Tornado, Hurricane, etc.) one thing becomes clear - your cellphones and Internet-linked computers are virtually useless. Telephone poles are usually down, so you can't count on that, and in many cases you won't have electricity either. How do you plan to survive? Do you even have a plan to survive that every family member knows of? How long will your rechargeable devices, fresh water, food, and other supplies last? Tough questions.

Sometimes humans pool together to help one another, while other times it gets nasty and the dark side of human nature pits one against the other.

Much like a "Will", which covers things cleanly after you depart this world, you should have a well thought out plan for life, because when it becomes "everyone for themselves", you'd wish you had one in hand.

There are the usual things you can do: 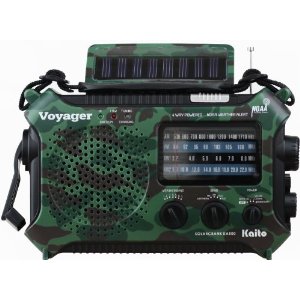 What makes it special?

﻿
Not bad for under $50.
Yes, this is an unlikely topic for this Blog, however I named it what I did so I could write about any subject I chose to. There more to write about this subject which I'll include in Part 2.

BTW: if you ever have a problem viewing one of my blogs, try an alternate view, like TIMELINE or another web browser like Fire Fox or Chrome. 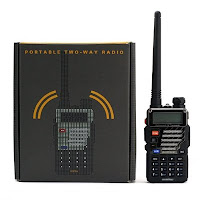 A crop of unknown brand/Chinese 2-way electronics have been popping up with more frequency. This particular model, the Baofeng UV-5R+ was made specifically for 3 online vendors (Ebay, Amazon, and-i-forgot-the-last-one). I encountered this model on Amazon.com, and it seems to vary in price; either $49, or $54.99. Compare either price to any low end Yaesu, Icom, or Kenwood and you'll find a vast difference in price.

The manual is lacking quite a bit, but I've found some of our more established vendors coming out with a new product and a crappy manual. I read what I could find on the web about it, including my favorite "Go-to" review site - EHAM.NET REVIEWS as well and figured it would be much easier configuring this thing with the software and cable (an extra $10 at the time).

As usual, it arrived packed in an Amazon box in two days, and when I opened up the Baofeng box I found a dualband HT that looked less toy and more Ham-like. It was partiall charged but I popped it into the stand up charger anyways. 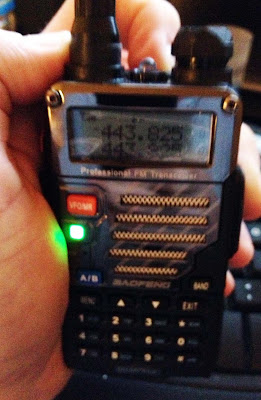 FITS INTO MY HAND JUST FINE

Once charged, I compared (receive only) with my VX-6R and found that they were both close, however the UV-5R+ did seem to pick up the local repeater I used in some places I could never get the Yaesu to do.

The software and cable are kinda weird. The software being very basic, and try sticking to the same USB port each time, or you'll have to set aside another one as a COM port. If you've heard that the cable doesn't fit quite right, you're correct. To make a good solid connection while programming the HT it's best to keep one hand firming putting pressure on the cable where it connects to the radio.﻿ I hope the external speaker/microphone isn't that bad.

Okay, a taste for now - more later....END PART ONE


I was reading an interesting article about one fellows radio interference (electrical hash) and it was the electronic version I get on my iPad, so any references he made with links I was able to click-and-go-to. Many times this type of stuff is the electric companies fault, but in this case it wasn't. The ARRL reported a Florida Ham was issued a $25,000 fine for operating on frequencies not licensed for. Apparently he was jamming and otherwise being a nuisance on a frequency used by, in this case, the Florida prison system. 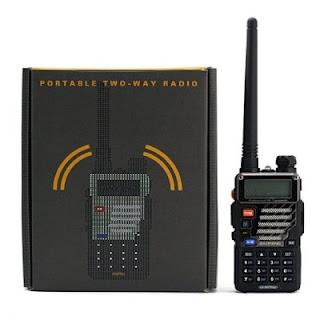 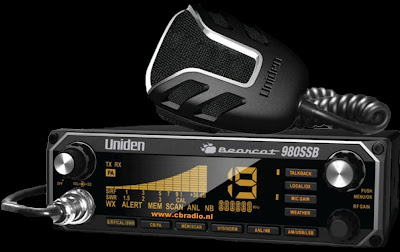 Yep, I finally got around with finishing this review, then spent a couple days looking for my review notes - but now I'm ready to spill the beans....

In our last exciting episode I believe I was comparing this to Midland's 79-290, somewhat feature-wise, but mostly the footprint (the space that it takes up in your vehicle) and comparing it to my daily companion: a Cobra 138 GTL 40ch. mobile.

First, the weight difference. Neither radio had mounting brackets or microphone attached, so I was weighing the radio only.  The 980 was (to my surprise) 2lbs. 6oz while the 138GTL came in at 5lbs. 8oz.

I can only speculate that the added plastic and SMD's in the 980 was the reason it was so light weight. Once again, it's weight was similar to the Midland. I spent a week with the 980 in the truck and came up with these non-scientific results using Wilson's "lil Wil" mag mount on the roof of my SUV:

In some respects the Uniden Bearcat 980 surprised me, because if you're a regular reader of this Blog you know that I'm not a big fan of anything made in China. The fact that it's not as deep as a full-sized rig may help those with limited mounting positions/space, but they'll have to take the daylight driving vs. seeing the screen into consideration as well when choosing a mounting location. Perusing the Internet via Google I found a mod to kill the beep, but no one replied that they tried it too and it worked, so I'm still dubious about that one, and really, that's about the only Mod I found for this transceiver. If I were in the market for a new AM/SSB rig I would definitely consider this one (and probably buy it), but I'm not, so the 138 is back in it's usual spot in the truck.