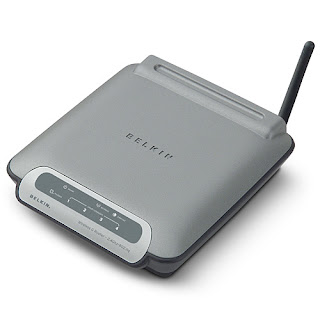 REVIEW: BELKIN WIRELESS ROUTER
-
One of the things about moving somewhere else is that you have to deal with gettings your IT stuff going again.
-
I was already in the hole, having to deal with Comcast, which sucks (IMHO), and I've had several battles with WAP's and Wireless Routers to put it off towards the end of things to do.......
-
So I went to Frys and walked down the aisle of doom an each box seemed to tell me the same as the other, but still it was better so I should pay $50 more than the one next to it. One walk-thru and I found the cheapest one and bought it. Rushing home I pulled items out of the package, and hooked up my base station (Hmmmm...."Base Station", sounds familiar), then setup security (that's right Steven, I setup security) and went into the other room and picked up another wireless device - It worked!!!
-
This took less than 15min tops (closer to 1o) and I was really impressed. Later I went back and ready mostly middle-of-the-road reviews and some pretty crummy ones too, but for me, this Belkin wireless router, for under $30 did everything it said it would and more! If I run into any issues, I'll keep you updated as well, and with nothing less to say.....
-
'Nuff Said
Woody
-
Posted by The Stoner Guy at 1:18 PM 2 comments:

"AND A MERRY CHRISTMAS IT WAS...."
-
Christmas has come and gone and at least for m 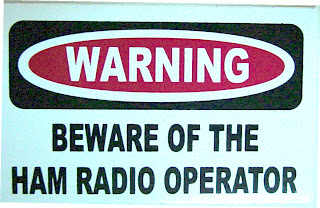 e, it was a nice quiet but enjoyable day. Robin hit the spot with some HAM related stuff like a polo shirt with my callsign, a plaque, and related stickers. This one at the right caught my funny bone just right, and I laugh almost everytime I look at it. 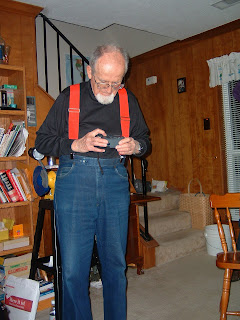 ater that evening, at my Dad's, the whole clan was there, even my son Chris who seemingly dropped o 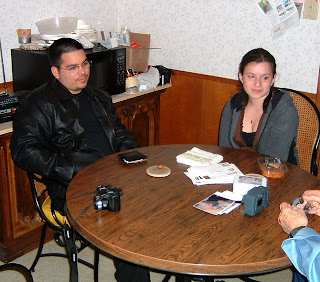 ff the edge of the world for a few months, and finally met his finance, Ada.
-

DAD (Above)
-
Son Chris and Ada
-
There was plenty picture taking (Someone better send me some of them...Oops, Bro Glenn just did and I'm adding them). And I guess we all dispersed around 9 o'clock. I had taken the day after Christmas off and was pretty much a couch slug but finally the "Bourne Trilogy" energized me enough to start cleaning up, and trying to figure out where to put all those Hardy Boys and Doc Savage books. Once again, I bought most of the gifts online, and usually from Amazon (they seem to get better each year). 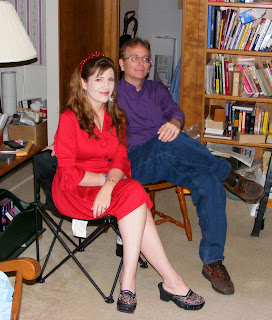 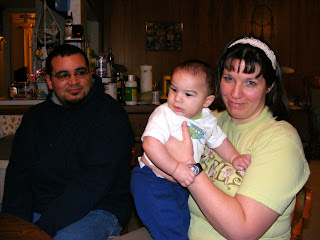 -
The big flat screen TV I'd moved (but didn't work when we hooked it up) was fixed the Saturday before Christmas and I'm not sure if this applies to all of their products with extended warranties, but unlike the nightmare we had in getting our old 60" TV fixed (it took six months and 4 trips) by a 3rd party source, I was surprised to see a "BEST BUY" van pulling up to my apartment (This was surprise No.2 becase No.1 was calling them on a Friday afternoon and having them say "We'll be out tomorrow"). Finally the 3rd surprise was having him fix it in under 15 minutes. I'm impressed. 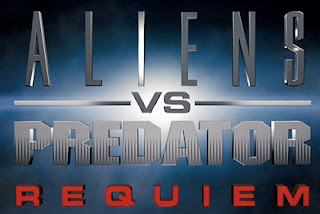 -
Time to get off the boring divorce thread, friends I've met and yet to meet!! First off, you HAVE to get "Twisted Sisters" rock-Christmas CD called "A Twisted Christmas". This kicks butt, and no other rock group has a Christmas Album that can compare. The problem with past albums is you hear a singer or group you might have listened to in the past, is that they sing the songs the traditional way. Twisted Sister sing's them their way and their way rocks!
-
MOVIES: The next Alien vs. Predator is one to see - take it from me.

-
Looks like I'll have to visit some ham fest's next month and start rebuilding the "Shack", so any great apartment antenna plans, or inexpensive pre-fab'd antennas are welcome. I'll be working some HF, FM, and VHF-SSB.
-
Hope Ya'll have a great Christmas (should I not post until afterwards).
-
H0-Ho-Ho,
-
WOODY
-
Posted by The Stoner Guy at 9:15 AM No comments:

"TODAY WAS THE DAY"
[i.e. - "Divorce of the Common Ham:]
-
Today was the day I came out to collect my personal belongings, chest, computer desk, etc. and we all tumbled into the two vehicles and arrived in pretty good time. The XYL had put her "I'm happy, let's have a party face" on, and I observed my shack with radios that should be in boxes "out", and so grabbed a poster or two, while the XYL handled various calls from her "Support Group".
-
Next came the big screen TV and got that on the van. When I got back to the new place we found it didn't work, which didn't surprise me due to a comment made at our last court hearing. Our 32" flat screen will have to suffice until what happened.
-
The chest was removed and we got that on, but the thought of leaving my radios to potential danger was steadily on my mind. I tried to at least get some of my CB magazines to read, but no, I got the standard answer "I don't care about those but my attorney does - you'll have to talk him directory". Of course, my attorney would do that part. Meanwhile time goes on.
-
Summary: It's sad things like this have to happen. Even sadder when 2 people can just sit down and and say: "I want this item" what do you want? Then file and get the divorce over as quickly and painfully in the wallet as possible. Having built up a collection of rigs from my teenage years meant a lot to me, but I understand her wanting to hit where it hurts hardest. I am in an a apartment now (no more cheapmotels) and things are getting back to normal (with the exception of the radios of course).
-
So my friends, 'Nuff Said -
-
Woody
-
Posted by The Stoner Guy at 1:31 PM 1 comment:

DIVORCE AND THE COMMON HAM PT.3
-
Apparently there is no way the soon-to-be ex will let go of my radios, but in every cloud, there is a lining. The last couple years I'd be buying broken rigs that I could repair when I had time, so it doesn't do her much good in that respect. Sure, there are some older ones I bought to rebuild the ones I had as a teenager, but as I've often said: "If you've seen it once on E-bay, you'll see it again".
-
Tomorrow is the day where I can retrieve my clothes, dresser, personal belongings (seems like radios would be in that category), computer desk, ups, etc. Maybe I can get the latest QST, and some other CB magazines just to pass the time away. But in December, it's more like "Not enough time", and this year is no different (with the exception of no bonus for 2007). Hope ya'll get what ya wished for in your Radio "Dreamland" and I'll let ya know how I make out too!
-
73

DIVORCE AND THE COMMON HAM, PT.2
-
I'm sitting in the dark with one of those funky USB lights, typing this post. While most people would think that the holidays were the worst time to start a divorce, being a radio guy, I can tell ya, anytime of the year is the worst. I used to have shack, meters, wires, rigs, old cb's I collected, surrounding me and not having that my friends, is the worst. It's like losing a bunch of your old buddies all at once (yeah, I'm locked out of the house, and for at least six months, won't even know if I'll own them anymore.
-
Sure, there are others things that are missed, but if you're any kind of radio nut like me, well, you know where I'm coming from. I've been staying in these "Extended Stay" places which can be good, or a night mare. Needless to say, I'll be a cave dweller at some point and that brings in a whole other set of problems. The XYL doesn't want my radios or magazines but I guess because I do, I can't have 'em...........it makes no sense. Well, that's my update for now - I have some Xmas shopping to do online.
73
Woody
Posted by The Stoner Guy at 9:19 PM No comments: