Well, July went by too fast and had too many problems, but I thought that today would be a good time to do a halfway decent update to the blog.

Because the S.O.W. is in the shop, in shock, whilst the able crew at Riverside Tire and Auto Repair try to get her back on her wheels again! Yesterday, I had to drive to work without A/C (not so comfortable in August, in Texas) but not nearly as bad as the blast furnace it was going home. My story doesn't end there - it ends with me exiting the fwy and having the water pump go out! Oh the pain......
-
But that gives us a chance to catch up on things!
-

Today, I'm trying to make some room so I can sort out the stuff I'll be selling off (as well as trying to find some missing items), and organize things a tad better (tubes all in one area, for instance) and it is pleasant doing this because DX has been roaming around all day. So let's start with the Texas Fright Fest! 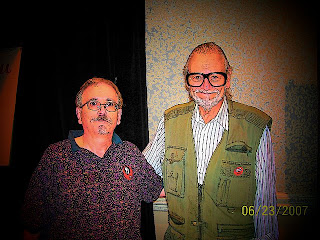 In June I got to greet, meet, shake hands, have a picture taken with, and have a DVD signed by GEORGE ROMERO ("Night of the Living Dead", "Dawn of the Dead", "Creepshow", etc.) I never expected to meet the man in my lifetime but this was an opportunity that I couldn't pass up. Some Background: When I saw "Night of the Living Dead" it was back in New England, around 1970. It was double-billed with another movie called "Equinox". There was a lot of talk about this movie and how barf bags would be handed out, extreme violence, etc. But I'd been watching horror/sci-fi movies for years, I didn't think it could be THAT different than any of the others.... 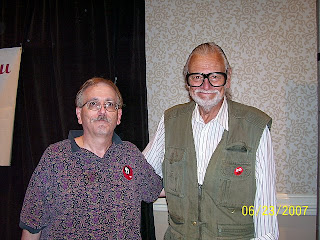 But I couldn't be more incorrect in my assessment. "Equinox" was okay, the usual fare, but "Night Of The Living Dead" was definitely several floors up the elevator from what I'd ever seen before. I w 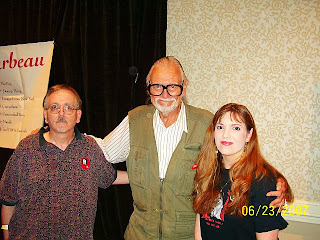 asn't the only one, towards the end of the movie he ran towards the exit, hand-over-mouth, and not only could you hear people barfing, you could smell it......The world of "Horror" movies had changed forever and George was the pioneer. "Dawn Of The Dead" followed by "Day Of The Dead", with my favorite being the 2nd movie (Dawn). So needless to say, it was great to meet the guy who opened us all up to a new level of emotions. The other half of "RobinWood Productions" (Robin), George Romero, and myself, pictured on the top right. 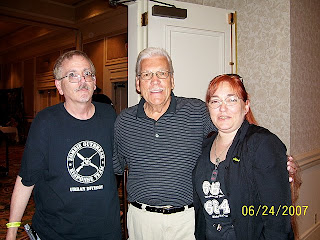 HERE I AM WITH TOM ATKINS & XYL

(BTW - Tom was always very nice, polite, and happy to pose for a photo)- 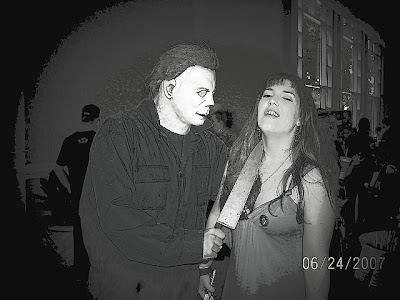 This guy was really cool!! Not only was he tall, and dressed for the part, he had Michael Myers moves down like he was, "Michael Myers". In this photo, you see him about to kill Robin, but in my video you'll see what I mean about the moves. According to Robin, he never said a word, and while I was taping him coming towards me, he never said a thing, or commented on what I was saying until the very end when he was right in the face of the camera and I said, "Cool outfit dude", and from behind the mask I heard a faint "Thanks".