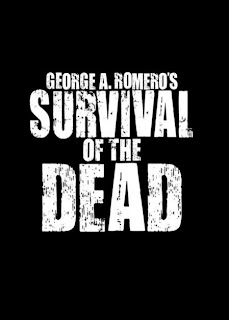 REVIEW: SURVIVAL OF THE DEAD

In this latest installment of George Romero's Zombie series I think Robin and I watched the movie much like it was filmed - half asleep (in some cases, sleep writing, acting, etc.). There's not a lot to get excited about here; Yes, there is actually a character carryover arch that you don't usually find, and yes, there's a zombie who likes to ride horses, but even Mr. Romero himself has said that he didn't plan on doing another zombie film (after "Diary of the Dead") for at least another four or five years until the studio waved a bunch of money at him. I'm not sure if the wait would have helped, and George is such a good Director it's a shame that he doesn't get much chance to do it unless Zombies are involved.
-
Imagine a zombie movie on an Island that is populated (present day) by two feuding Irish families that dress and talk like cowboys, located off the US coast, then figure it out yourself. The film is being shown this weekend and perhaps one other before going direct-to-video.
-
2 stars out of 5
-
Woody
=
Posted by The Stoner Guy at 6:06 AM