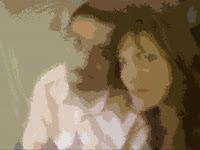 LIFE, DEATH, & PHOTOSHOP
-
This past weekend I was up in Texarkana with Robin to attend the services and funeral of her Aunt Argie, who passed away early last week while fighting cancer at her in-home hospice care in Pearland. It was a quick attack, lasting less than a year, and the speed of her downward spiral took us all by surprise. It was just a week before that Robin had brought a cassette recorder down to capture some of her stories and early family memories on tape. We didn't know it would be our only recording.
-
Robin and her mom drove up on Monday, while I stayed behind until late in the week. My mission: to scan and retouch as many photos of Argie as I could before the service. Partially due to my erratic scanner, and the age of the photographs, it could easily take two or three hou 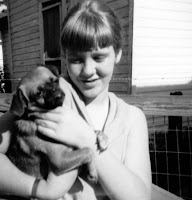 rs just to get one picture ready for printing (or presentation). If any of you have undertaken this type of restoration, you know that you spend a lot of time editing at 300-400%, then dropping down to 100% to make sure you got it right; then back up to pixel sized editing again, over and over.
-
As I dropped down to normal viewing, from time-to-time I couldn't help but look at the picture, Argie (at various ages), her surroundings, and 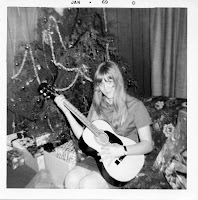 wonder about things like: "Was that her first puppy?", or a black and white Christmas photo taken in her teens as she holds her brand new folk guitar and thinking "What were her plans and dreams at that moment?", and so it went, right up to the last photo I had time to do before time itself ran out. I emailed the photos and left to join Robin.
-
This week, I'm still scanning photos and doing the best I can to restore them, and eventually when I'm finished, I'd like to use a service from Walgreens photo that I've used before: a cloth-bound photo book - this one filled with pictures from Argie's life. And now that I've gone through this process I've promised myself to take a little longer when looking through someone else's photo book(s), because I've learned that if you take the time and really look you'll find, it's true what they say: that "Every picture tells a story....".
-
P.S.- While away, I received an e-mail that said my oldest Son's wife lost her brother around the same time (no idea from what). I can't imagine what that would be like - I only have one brother, but I know that I wouldn't want to see him depart so soon.
Posted by The Stoner Guy at 4:54 AM