SORRY FOR THE LACK OF....
INTELLIGENT? BLOGGING
-
Yes indeed, I did receive a few e-mails along the lines of "Still alive?", but it's been a bear at work, and, combined with other things, I just didn't have the time to do much blogging.
-
TOE REPORT: Well, going in for another X-RAY Friday, and hopefully he won't say: "It's coming along, maybe another 4-6 weeks". 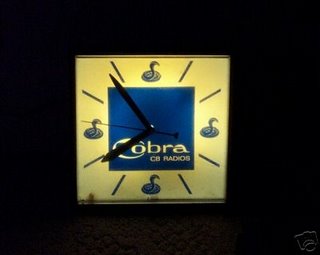 -
So, did everyone enjoy the time change this weekend?? (ed. - Note:Sarcastic Tone) Well, not me. The XYL prefers this time change, but I guess my body just likes the other one, so for the next couple months, it'll be a bit hard adjusting to the new time....Hmmm, "change", I think we're on a roll...
- 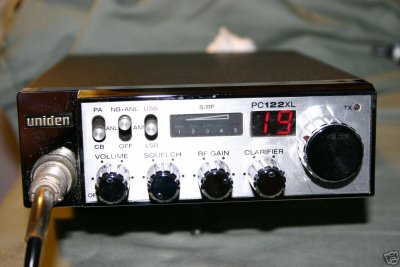 Pictured above is the Uniden PC-122XL, one of the smallest, yet best SSB mobile rigs around! I saw this one on EBAY a few minutes ago and it looked so good I had to post the picture here.

If you've read my review on this little marvel you already know what I think about it - if you haven't....Son, what are you waiting for?? Besides the size (easier fit in small cars) the Sideband audio is terrific with the STOCK microphone. I still have my PC-122 lurking around the room somewhere....just waiting to be recalled to duty!

There was a time when the FCC had the right spirit, and it's ducks in a row (I guess), but as with everything - change happens. Personally, I'm not that big a fan for change, especially when it involves SAP and when I get my paycheck (ed. - but THAT'S another story), but heck, change happens and when it does you either adapt or become a relic.

In the "Olden Days", when a town's water supply ran out, or the railroad moved it's tracks, the town picked up and moved on, which is why we have so many nifty ghost towns out west....(ed.- I'll bet you're wondering where the hell I'm headed huh? Dunno myself). But when it comes to Government, well, change is evil and best well ignored unless a big stink is made about it by the public.

*NOTE: Ham's have to go with the flow as well and I'm getting tired of the "Hey, there's too many CB antennas at this hamfest" remarks, because like it or not - if you are going to maintain your ranks, CB is the place to recruit. They are your future, should you want to keep your bandspace (I say "They" because, I'm both a HAM and CB operator).

The FCC has made some changes in the last 20 years (regarding Amateur Radio), but I sense that they really would prefer it shrank or went away so they could auction off the bandwidth to help shrink that multi-trillion deficit by a few million dollars or so. After all, look how long it takes them (Ed. - "years-to-never") in getting rid of known repeater jammers, music players, frequency squatters, etc. And of course, they've shown their love for us by pushing BPL....you'd almost think there's a mandate to crush Amateur Radio huh?

As well, they've been trying to get rid of the CB Band since it exploded, but it will never go away, and perhaps someday, when other means of communications are not available, they will thank the day that there are millions of 11m radios around the country....But, I digress.

The FCC should be apolitical, (neutral). Yet we get Republication and Democratic fobs put in charge, with an agenda to follow the "Corporate Line" much like a Democratic or Republican nominee for Judge - you have to wonder if they will be truly impartial. So, that's one change that should be made.

In regards to policing the airwaves, someone really has to look at the reasons why: they can't shut a station down, whom they know who it is / where they live / what their call sign is / and perhaps even have audio tapes of the offense ....and yet they seem to have no problems whipping out fines, etc. for a CBer who has strayed. One has to wonder if HAMS have some secret get-out-of-jail card (if so, I never got mine).

I know I'll get hate mail for what I'm going to say now, however, I think that K1MAN is actually doing a public service for all of us - not by violating any rules, but by forcing the FCC, step-by-step to either prove or disprove exactly how valid their LEGAL authority is, and, more importantly, are they REALLY able to go around the courts to be able to punnish someone. Granted, most of us would fold with a first notice and give a polite "Yasser", but while I may not agree with all of K1MAN's agenda, I do applaud him for forcing the Fed's to actually go through the legal system. Maybe they DON'T have the awesome power they think they do, maybe radio operators DO have rights, and unless K1MAN folds, I expect this to end up in a much higher court.

More on "Change and the FCC" later... 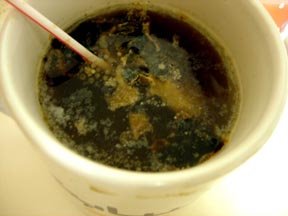 s I may just have one or two cups at work, then nothing for a couple months. This of course, explains the lovely looking cup pictured to your right!! I poured some piping hot water into the cup so the green scummy flotilla would rise, and sure enough - they did. Kinda like deadly lilly pads.....It's in my nature to share personal moments like these. 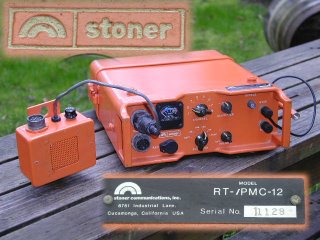 Here's an interesting Stoner that was auctioned on EBAY, Model RT-/PMC-12. It was listed as a prototype because the interior was vacant. I don't know if that's true or not - most prototypes I've seen either don't have serial numbers or they just use a code name to ID it. Nonetheless this will make a great addition to the Stoner collector who bought it. Until the last few years, I never realized how much involvement Stoner Corp. had with the military, and I'd be curious to learn more (being TheStonerGuy I am).

Received some e-mail from Bill Grassa, whom I' 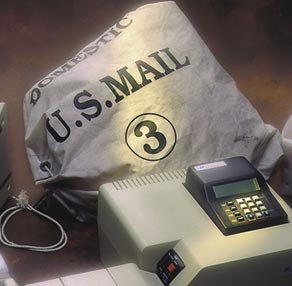 d lost contact with for many years, and he attached a picture and some info to go along with it that I'll use in my next Blog post.

-TNX Bill, and Good to hear from ya again!

Well, once again we've reached the end of the coax, and our signals and fading into the background hiss, so, as I'm often heard to say: