SO WHAT DID SANTA BRING YOU??
-
It's finally over (this years Holiday Marketing, huge crowds at the Mall, Best Buy, the Post Office, and clogged freeway traffic). Due to a shortfall of $$$ and a Bonus that came the Friday before Christmas, I didn't get to exercise my Internet shopping prowness as much as last year, but it is indeed, my favorite way to beat the lines!
-
I don't usually jump all over the web to buy items - I can usually find them in 1 or 2 websites I shop at, and since I've started this type of Holiday spending, I haven't come down with quite as many illnesses - thanks to keeping out of germs way.
-
Back to Santa, and your gifts...
-
I gave myself 2 luxury items this year, one of them was right in line with my hobby interests, the other was...well, "out of the blue": 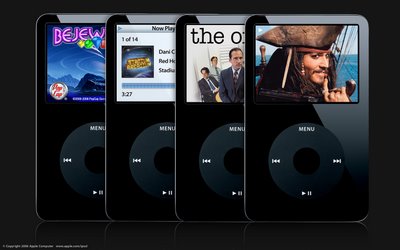 I got the black one (it looks cool but shows every fingerprint and smudge) because that's all the store had, and found that I was amazed at how small the IPOD is, considering it has a 30GB HD in it! The color screen is small, but bright and sharp and I don't like the earbuds that come with it. I've listened to ONE song so far, but have watched 2 episodes of "The Land of Giants" TV show from the sixties. I can see that this little player will come in handy whenever I'm expecting a long wait (doctors office).

And then there is always the unexpected!! I p

icked up 2 Stoner items - One book "The New CB Sideband Book" (I've never seen this one before. Don wrote one in 1958 called "The New Sideband Book", which I have a copy of, but this one was written in 1977 and deals strictly with CB and has a few plugs for his "NEW" Stoner Pro40).

The second item was a Tube rig, the "Stoner SSB-100", which was probably a marine HF SSB transceiver (haven't received it yet, so I'm not sure).