Even though I had my base setup back in the late 60's / early 70's I was fascinated by walkies-talkies. Of course, like many a youth, I started out using 100mw walkies-talkies that were usually on channel 11 or 14.  I guess they had more "character" back then, because I'm certainly not as gun-ho with today's walkies-talkies or HAM HT's.


Al Gross was a pioneer in the 40's with portable two-way radios, but I'm not sure how he or anyone could have predicted the wild popularity of CB radio. In the early sixties even 100mw handhelds commanded a "King's Ransom". A 100mw walkie-talkie in 1960 sold for up to $100 or more, and using the inflation calculator, a $100 purchase was equal to $858.13 in 2019 dollars. 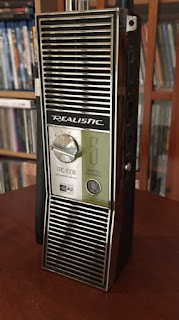 I'll skip my early 100mw radios and scoot right up to the first 5 watt walkie-talkie that I ever owned, Radio Shack's TRC-100B 6-channel model.

While the general opinion was that Lafayette Radio Electronics equipment was better quality than Radio Shack (never proven), LRE had a hard time competing against transceivers that looked as good as the ones Tandy sold.

The TRC-100B (NEW FOR 69)had a 5 watt input power and featured a mechanical filter for better adjacent channel rejection, 6 channel positions with channel 11 installed. Other features: ANL, AGC, center loaded antenna, automatic "range boost", and a separate speaker and ceramic microphone! This series (the 3-watt TRC-99 and 5-watt TRC-100B), although plastic, was much more pleasing to the eye compared to most competition (with the exception of Midland).


Suffice to say I ran through batteries and my Dad's wallet quite frequently when using my TRC-100B. 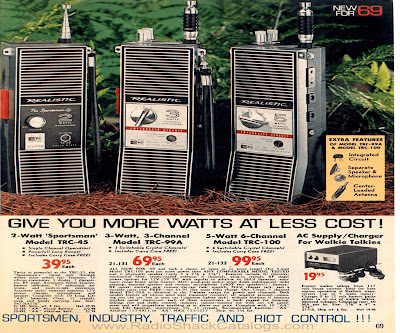 The TRC-100B came with 1 set of crystals leaving 5 paired open slots for additional channels. Crystals were $5 per channel so if you wanted all six slots full it would cost you an additional $25 or, $174.78 in 2019 dollars.


There were places you could buy crystals other than Radio Shack at the time so it was possible to save $5, but today, finding new crystals is near impossible and sometimes you have to extract them from "donors".

For the frugal Radio Shack had the TRC-99, which had identical internal circuitry but only put out 3 watts and had 3 less channels positions than it's big brother.

I will continue this thread in the months to come.