The story goes back to Christmas 2018 when I opened up a innocuous looking envelope from my wife containing tickets to see the Stones in April of this year 😂. I had never expressed a desire to see them because at this stage of the game how good could they be compared to the cost and trouble to get there?

You see, I haven't really paid much attention to them since the early 80's and figured that whenever I saw a tour coming up it would be an expensive "oldies" venue with a bunch of non animated old guys who couldn't keep up with their own past. I was wrong.

Of course when April came around and as I started gearing up for the event, we found out abruptly (a few days before the concert) that the whole tour had just been postponed due to Mick's heart problem and subsequent surgery 😣.

Not too long after Mick's surgery and quick recovery (late May) the new dates were announced and it was now ordained that we would see the Rolling Stones on July 27th, one day after his 76th Birthday.  Enough back story... 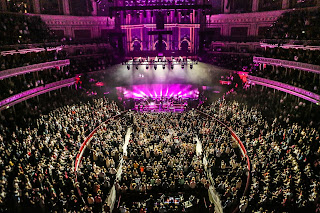 The week of the concert it was announced that "Bishop Gunn" was joining the tour and would be the opening act. We had never heard of them, however, they put on a loud, rousing show highlighting their own brand of Southern Rock achieving their goal - to juice up the crowd for the main event.

** To be clear, the following videos aren't mine, but courtesy of YouTube embedding. Follow the videos on YouTube to catch more great concert footage by the people that took them!

The Stones burst onto stage just before nine o'clock, opening with the song that first got me listening to them - Jumping Jack Flash 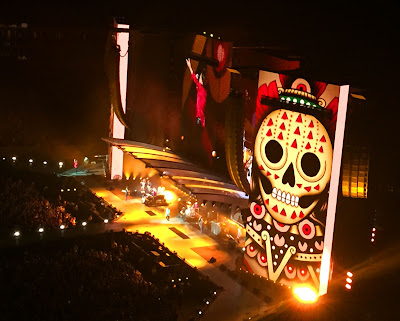 We weren't sitting as close to the action as the video above but seriously, there probably wasn't a bad seat in the house. 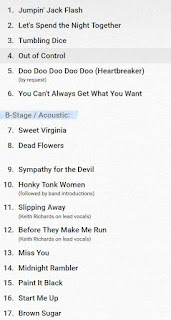 The set list (to the right) was good and included several songs ("Out Of Control" and "Slipping Away") we had never heard.

They were good, but where the heck did they come from?

Obviously, from albums I'd never listened to because I had stopped following them decades before, never realizing that they still put out new music that was very listenable.


We learned (after-the-fact) that concert goers could tweet in their votes for their favorite Stones song and the highest tweeted song would then be performed "live". In Houston that night, the tweeted favorite song was "Heartbreaker"


After wasting enough of your time here's the upshot:

Traffic to and from NRG was a non-issue, and $30 to park was more-or-less expected. Of course, the  food and beverage prices were stadium priced, yet a few deals could be had (Karbach draft and potato wedges).

I'm trying not to fall into the 'abyss of age' trap by basing my thoughts on some sliding scale on how they did vs. how old they are, so, as a "typical" Rock Concert this was a energy filled event, complete with great tunes, guitar playing, vocals, and Mick Jagger played a mean harmonica.

Side note: Concert T-shirt prices were about $60 and up. The selection to choose from was, eh, so we took the money that we would have spent on two shirts and bought all of the CD's we had never heard the next day on Amazon. While the event is over I have a lot of good music to catch up on.