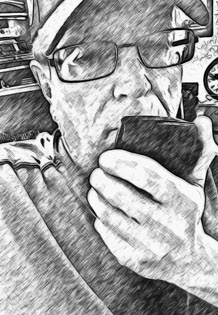 Sometimes, it’s tough not to view things through nostalgia-tinted glasses like when I’m reviewing a transceiver. If the CB is a new model it will almost always come up short in comparison to one made in the late 70’s to mid-80’s, especially when comparing adjacent channel rejection, or how easily the front end can be overloaded by strong signals.

Back in the day we had numerous CB magazines and buyer’s guides to help us figure out which radio was better (or worse) than another. In Connecticut everyone was pretty close to each other so adjacent channel rejection numbers, even though they were ones supplied by the manufacturers, were important to compare. Where I lived there were no less than a half dozen base stations within a 10 mile radius, so to a degree, the numbers found in buyer’s guides helped form a decision on what to buy (or not). 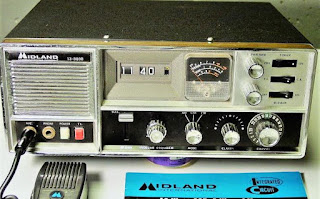 In other post’s I’ve mentioned my first single-sideband rig, Midland’s 13-880b. Considering how new sideband rigs were to the 1970 scene it was surprising how inexpensive it was, yet there were a couple factors involved...

The public’s perception of inferior transmitter output (it was rated at 10 watts SSB, versus the 885b with 15w) led many to steer clear of this model.

Secondly, a poor adjacent channel rejection rating (-50db) meant it wouldn’t be the best rig to have in congested areas. I went into the purchase knowing that a 5 watt difference wouldn’t be a big deal breaker, and yet, even though I considered how easy it would be to have bleed over from other channels shutdown the receiver section, my desire to leap into SSB over-road any idea of waiting until I had enough money for a better radio. I ended up having to switch to AM with my E.F. Johnson Messenger 124 to combat strong signals from locals on other channels.


Flash forward to the mid-1990’s and those late 70’s CB’s were still fairly young (less than 20 years old). Manufacturers had moved out of Japan and it wouldn’t be too long before almost everything was made in China. Displays and features were fantastic compared to those older CB’s, including prices, but whenever I reviewed a new model I couldn’t seem to get past the weak adjacent channel rejection and/or over-loaded front-end. I've found other reviewer’s like CB Radio Magazine did a better job of maintaining a neutral stance regarding old vs. new comparisons, and in recent years I’ve been trying to do the same, but still have to fight the urge to backslide. Build quality is an entirely different beast and it will require a blog post of it’s own.

Suffice to say - I'll try and keep comparisons to radios that are less than 20 years apart 😉, so after a smirk and a wink, let's move on...

ANOTHER ONE IS FOUND (QSL'S FROM HOME) 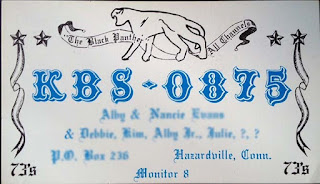 Recently I wrote about a QSL card that I ran across on the Web which was from my own "Back-in-the-day" CB history, from the Whopper. I felt very lucky to have spotted it. Flash forward 3 weeks and low and behold I've just spotted another one on EBay.

KBS-0875 is very familiar to me - it was one of the older cards because it was from Hazardville (Hazardville and Thompsonville merged to form Enfield around 1970), as well, their preferred channel to Monitor (ch.8) rang a bell in my head. Granted, my memory could be tainted, but I recall that their father ran a CB radio store out of the garage which gave many locals an opportunity to sample brands other than Lafayette or Radio Shack. 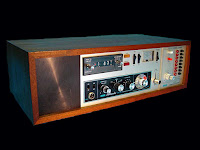 Short of driving across the border into Massachusetts, there wasn't any other option unless you chose mail-order, where you possibly had to buy something you'd never seen, except in a CB Magazine. Because this was a sideline, he didn't have a huge selection, but it was better than nothing.

If memory holds true, and this is the same guy I recall, this is where Mr. Chips bought and received the first SBE Super Console in our area, so it's very cool to have found this card and I'm on the hunt for others (as well as my own).


OLD STORIES THAT ARE STILL FUN TO READ


Even I forget everything I put on the CB Gazette website long ago, so I found myself chuckling while reading a humorous story about the GE Superbase from 1999. I came across this while repairing broken links on the site so while I'm doing that, here's the story: 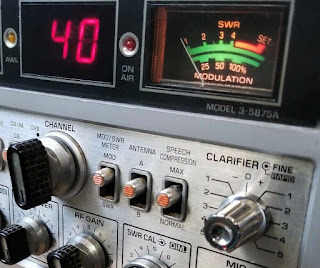 Legend has it that Bodacious Barney (a.k.a. - "Buckwheat") got tired of
being blown away by his closeby neighbor, sometimes friend, and always
rival, Jaybird.  Jaybird was of college age, but due to some disability
(laziness), unable to work and homebound 24 x 7. This enabled him to
more-or-less own the airwaves in bufford county!

Jaybird's rig-of-choice was a Johnson "Johnny" 350 with an external crystal
socket and a drawer full of crystals. He'd crank up the audio on his D-104,
and run his meager wattage into a PDL-II sitting ontop of a 60 foot tower,
and sometimes sneak his dad's footwarmer inline for those "special"
occasions.  Needless to say, whenever Jaybird was on-the-air, it annoyed
Barney to no end. Part of this had to do with the fact that both parties
only lived a few hundred yards from each other!

Jaybird always used to get Barney's goat when he switched to his secret
frequency, because the rig Barney was using didn't have any special channels
(also because Barney didn't own a goat). So Jaybird would wait for Barney to
get deep into a conversation then creep "upstairs", have an imaginary
conversation with himself while guzzling some Piels "real draft", and bleed
all over poor Barney.

One day Barney came home with a new rig - the G.E. "Superbase", modified for
extra channels - Upper AND Lower. Each week he'd pick a special frequency
and do unto Jaybird, as had been done to him. Naturally, Jaybird was
perplexed at first, but once he figgured out what his buddy down the road
was doing, he'd go down to the local tv repair shop (our clandestine CB
dealer) buy a new set of channels then jump onto Barneys secret frequency
and let him have it.  Didn't matter to Barney, he just waited til the next
week and picked a new frequency. 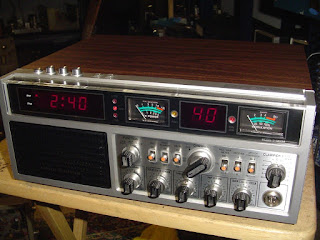 We don't know how many trips Jaybird made to the local tv repair shop for
crystals, how many real drafts he slugged down to bury the anguish, or even how much money he spent trying to keep up with Barney, but after a period of time, he just got real quiet, and finally quit CB altogether.

Jaybird later went on to become a VP at GE and finally stopped production of the Superbase while limiting GE's CB lineup to cheap handhelds.

The Superbase became a legend around Buford county and I guess while there is some truth to every story, this yarn seems pretty darn BIG....

RICHARD NEWSTEAD - FT8 VS. 2M FM WHILE VISITING THE PONDEROSA