Very often I'll link someone else's review of equipment that compliments my own review of the same item, but I haven't  thought much about revisiting older reviews from my former publication, the CB Gazette, until today.

In 1996 I featured Midland's new 79-290 am/ssb mobile radio on the cover of the August issue, with a review of the radio inside. I had forgot about that issue until just a few days ago when I stumbled upon a cache of back issues including  Issue No.14, August 1996, and utilizing the highest levels of my brain I quickly deduced that coincidentally this month was August as well, so why not re-visit that 24 year-old review? 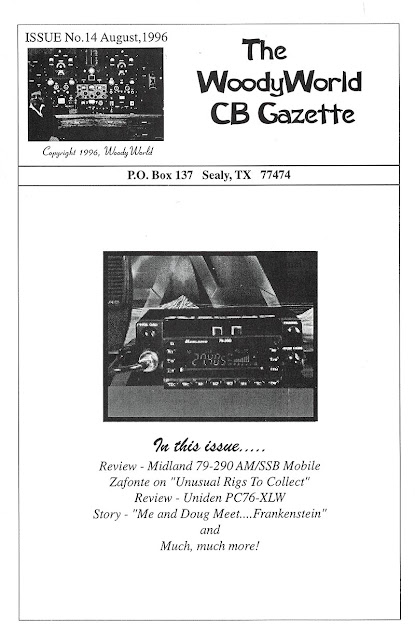 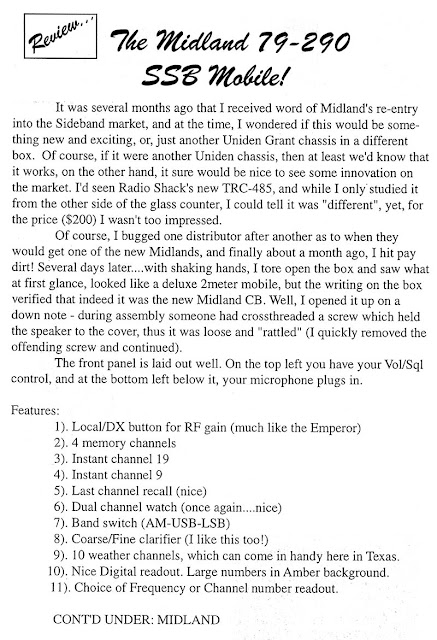 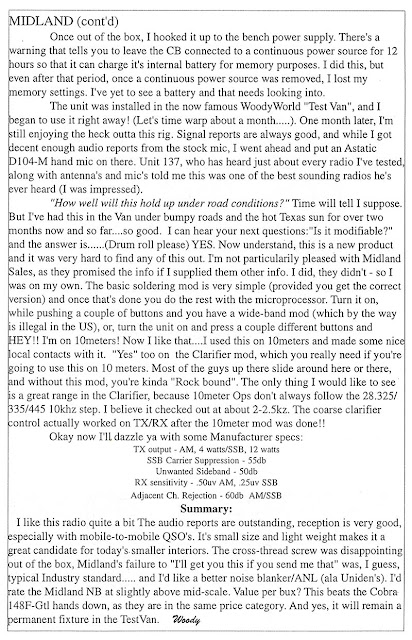 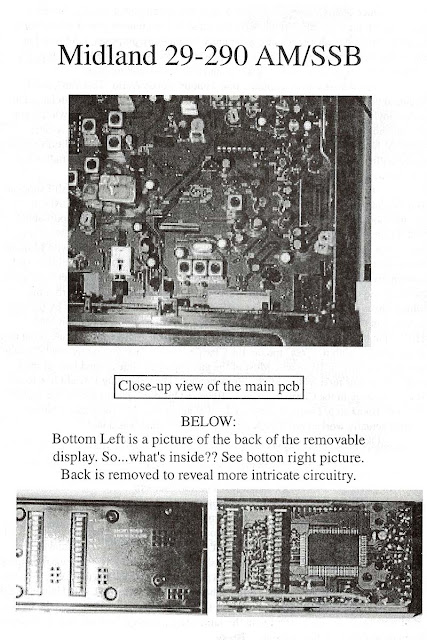 Well, I only winced a couple times while re-reading my old keyboard-pecked words, but, after giving it some thought, I'm happy to let you know that I haven't changed much, and I'm just as full of myself as I was back then 😏

I couldn't find the Gazette issue with the 2nd article I wrote about the 79-290, but I located most of my notepad files and will spew them upon ye now:

This Fall, when a road trip to Florida presented itself, I didn't hesitate to combine work with more work by bringing along a few radios to test during a long drive. Using my excellent mobile radio installation skills (i.e. - if can be wedged between a seat, it's installed) the infamous Woodyworld Test Van was ready to roll! 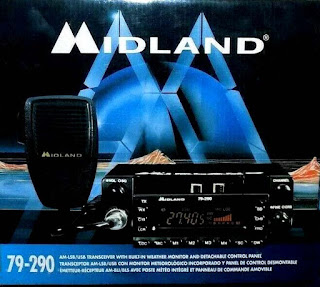 "Along with my Icom IC-207 dual-band mobile and a 10 meter rig, I brought along my recently purchased-for-review Midland 79-290 (introduced 2nd Quarter 1996), a clever transceiver in it's own right, which could serve the dual function of a CB and 10m mobile, but as you already know from my previous rants, I prefer a CB for CB, and an HF rig for 10 meters. As a back up, I also brought along my trusty Uniden PC-122xl which I could easily switch to by using my A/B switch box.

Occasionally, while driving along, I'd jump to channel 19 to obtain the latest road conditions provided by truckers that were coming from the other direction, but mainly I was roaming channels 36-40 LSB looking for any local or distant stations to chat with. While sandbagging on 38 I experienced something that would drop the review down a point or two - bleed over from ch.19

In most instances I could still hear stations on ch.38, however their voices were  occasionally crushed by a big truck going the other direction. Using the A/B box I was able to compare the Midland with the Uniden, and while I still received some splat on the 122, it was less severe than what the 79-290 picked up.

For this reason alone I would not use this as a primary base station.

As well, the noise blanker circuit in the Midland, which is incorporated in the design with no switch, wasn't quite as good as the switchable NB/ANL circuitry of the PC-122xl. I'm not sure if it even has an ANL circuit, or does but it's just not as good, but Uniden always seems to get noise reduction right.

Other than that, the 79-290 did a fine job - I received excellent audio reports and the receiver was very sensitive, picking up the smallest of SSB signals very clearly - slightly better than the Uniden PC-122XL. All other car-mobile comparisons were fairly equal during the remainder of the trip."


"...you'll find yourself doing the two-finger/two-button power ON Tango to regain those expanded channels...."

The Midland 79-290 is the Swiss Army Knife of CB transceivers: It's nice to have a very small am-ssb mobile in the car with features like: NOAA weather channels, dual-watch, instant ch.19, last channel recall, as well as several memory channels. It is highly expandable, with 240 channel/frequencies (25-29MHz), and the ability to toggle between a large 5-digit frequency readout or simple channel number. Depending on the method you use to power it "ON" you'll get: 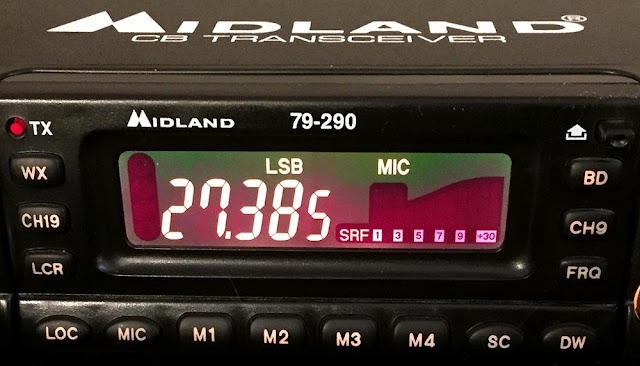 In my August review I noted that when I picked the test radio up at the Distributor they told me the radio had to be connected to a continuous power source for at least 12 hours, to allow a full charge of the internal battery. This was incorrect information. There isn't a "battery" inside the radio, merely a capacitor circuit that will hold the configuration for about 24 hours.

What this means: when the configuration is lost the radio no longer remembers whether or not it was modified, and assumes an UN-modified state, so you'll find yourself doing the two-finger/two-button power ON Tango to regain those expanded channels. Price: At the time of this review the Midland 79-290 is selling for under $170, just about anywhere that sells CB radios.

You shouldn't always take one reviewers experience as gospel so here are some other online reviews and information:


"I want to see a large frequency readout on my display, not a big channel number..."

Last-but-not-least: My experience was with two different 79-290's purchased in 1996/97. I've read that some later production models seemed to have stability issues on sideband that were similar to certain warbling Galaxy radios, possibly due to golden screwdrivers cranking up the finals too much. I've purchased several used models in the last couple years and they've been dead-on / center-slot, so maybe I'm lucky.

One of my complaints about the current crop of radios (with the addition of a frequency display) have been about its size compared to the channel number. Granted, if you own a legit CB radio it makes sense to have the channel number predominately displayed vs. the frequency, but when you get into the realm of a "Ten meter" radio it should be the reverse - I want to see a large frequency readout on my display, not a big channel number.

I feel that the 79-290 should have been given a second shot at success by the folks at Midland with a re-design that fixed the front-end issues. They could have called it the 79-290 II or Plus, and I think it they might have hit it out of the ballpark if they had - but it is what it was. 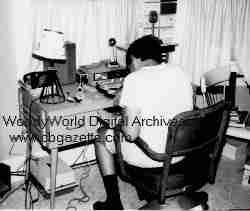 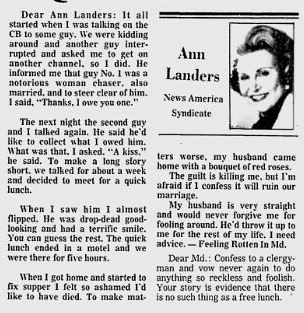