THE TURNER MICROPHONE STORY (AND EVERYTHING YOU ALWAYS WANTED TO KNOW) 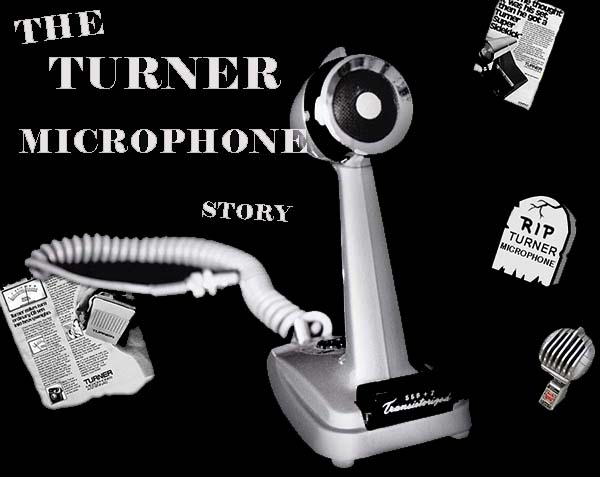 TELLING THIS STORY WAS A HUGE


Back in the early days of the CB Gazette I had links to several pages of information about the Turner microphone company compiled by Eric Braun. Several times over the years the website hosting his pages were changed, I would track Eric down to get the new IP address, update my links, and everything was back the way it used to be - until it wasn't (those pages are no longer available online).

I have his pages in my offline archive but I was unsure if I should bring them back from the archived crypt , or not, and ultimately to assemble as much information as I could get, gleaned from many sources including actual news clippings, to create a definitive article about Turner Microphone's history.


In May of this year an article, about the history of the Turner Microphone Company, written by Joe Coffey, was published by the Cedar Rapids Gazette I started thinking about Eric's webpages, Joe Coffey, and then Ed Murphy's 1951 article, and it seemed to me that this would be a good time to write something that tied everything together in one article (I have link to that article located towards the bottom, under "LINKS AND ADVERTISEMENTS").

In CB, when you think about buying a new microphone as an upgrade (to the stock mic that originally came with the radio), two names usually jump to the top of the list: Turner, and Astatic. I am using CB as an example because Citizens Band radio was wildly popular in the 60’s and 70’s, a period that solidified these two companies as Legends.

Both started earlier in the last Century, producing microphones that were used in many different areas like music, broadcasting, and radio communications during WWII, but I think the Turner Microphone Company’s origin story is possibly the oddest between the two – it was started in a Cedar Rapids funeral home.

David Turner Sr. was a very successful mortician in Cedar Rapids. He was so successful his funeral parlor often had standing room only attendance which left those in the very back of the room unable to hear what was being said up front. His son, David Turner III apparently had an eye for the latest/greatest technologies and sought the help of Everett Foster, a Cedar Rapids “Radio guy”, who came up with the solution using The PA, or Public Address system. He ran the PA system from the chapel to Turner's funeral parlors at 800 Second ave. SE, and the trial run was very successful.


•    1930 – After word spread about his system David was asked to do a demonstration of his PA system at the National Selected Mortician conference in Colorado Springs. The positive feedback solidified Turner's hunch they were on the cusp of something big. After returning to Cedar Rapids, PA system assembly takes place on the 3rd floor of the mortuary where it becomes clear that the microphone, was the systems weakest link, so a decision is made to manufacture a microphone to his own specifications.

•    1931 – The previous assembly area on the 3rd floor of the mortuary was relocated to 700 Third Avenue SE, former location of the old Turner Funeral home. David also eyes advances in pressure embalming machines and begins the manufacture of a more dependable version (another very successful venture)

•    1940 – Sales were successful and the Turner Microphone company now had 35 employees. World War II broke out, and that number rose to 210. The entire  production was geared to help Allied armed forces in making Quartz crystals used in both radio equipment and microphones. Because of this, embalming machine production was halted to enable 100% war effort. Of the 200+ employees, 85% were women.

•    1946/7 – Employee head count dropped to 50, with a concerted effort in expanding both audio and embalming machine sales. Improvements were made to the employee assembly/manufacturing areas: an art gallery of fine paintings were hung on every wall allowing employees to view them from wherever their station was located and music from the local radio station, as well as recorded music on record was piped into the building during work hours. Those ideas were ahead of their time. 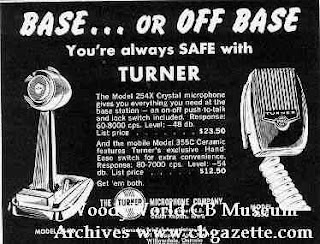 •    Into the 50’s – Company President Renald Evans (1946) and vice president William Nezeerka expanded further into microphone exports. As well, the Turner Microphone company became an OEM supplier of microphones for a large number of radio set manufacturers like Collins, Hallicrafters, and EF Johnson. By now, 25% of their microphone product was being exported to over 40 different countries.

Turner now had a sales staff of 14 and advertised in 15 different publications (Radio Electronics, QST, etc.). David Turner becomes chairman of the board of directors. Ed Murphy's article for the Cedar Rapids Gazette pointed out Turner Microphone sold 80,000 microphones in 1950.

This is not to say they weren't successful in other markets - they were. Turner Microphone continued supplying OEM microphones for a variety of electronic equipment (ham radio, music, PA systems). 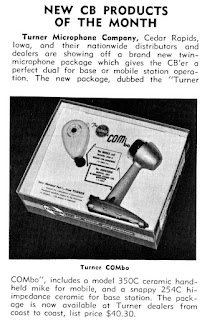 •    1967 – The Turner microphone company was sold to the Conrac Corporation becoming "Turner - a Conrac company".

With the CB craze in full swing new models were introduced: +3 desk and mobile, and the Super Sidekick.

•    1970's – The company branched out by manufacturing both base and mobile CB radio antennas. This new line was called "Signal Kicker". Sales were buoyed by the phenomenal sales of Citizens Band radios for the entire first half of the decade.

But in June 1979, Conrac revealed that Turner had been incurring substantial losses for the previous 18 months, and they were now looking for a buyer. It was no coincidence that the CB market had been rapidly shrinking as well.

•    August 1979 – Conrac/Turner was sold to Telex Communications. The Turner manufacturing plant in Cedar Rapids was closed and relocated to the Telex facilities, which was a big deal to both companies and their employees. Telex Communications President Ansel Kleiman said the Turner Microphone product line would allow them to enter a field they'd always wanted to be a part of.

He believed that Turner's problems was due to the high percentage of product devoted to CB radio, and that the line could be tweaked, with less emphasis on CB, and return to profitability within 2-3 years. 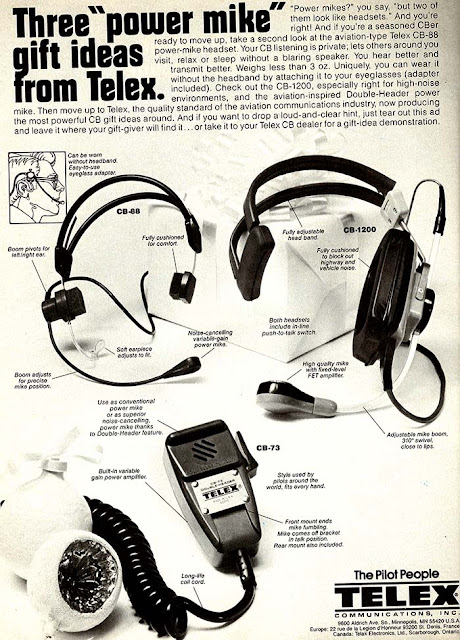 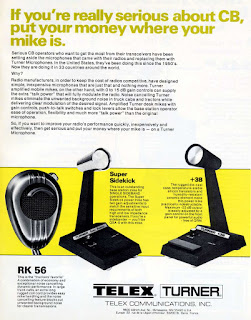 Turner microphones were still popular, but combined with the shrunken Citizens Band Radio market, and difficulty making inroads in other services, they yielded fewer sales as each year went by.

•    2011/12 – Telex-Turner/Barjan was sold to DAS Inc., a company which also bought the rights to many other famous CB brands (Astatic, K40, Wilson, and Francis), moving manufacturing to China

TURNER MICROPHONES ARE NOT RARE NOR HARD TO FIND

There is no shortage of Turner microphones on EBAY. If you missed out on getting your dream mic (whether it be still-in-box or not), don't panic because another one just as good or better will turn up soon.

When looking to buy a used Turner M+2 hand mic, if it's not in the description, always ask the seller if they opened it up to verify that it doesn't have a moldy/rotten leaking battery inside. Because you have to remove 4 screws to get to the battery, most of these (no matter how good looking they are on the outside) still have the original moldy/rotten leaking battery inside (my .02 cents)

HOW OLD IS IT?

The 1950-later 60's era Turner microphones came in a dark red box. After the Conrac purchase the box was mostly white with a dark red band, later changing to a jazzed up 70's box with a image and very seventies design of orange,red, and white colors. It's really not that big of a deal unless someone is trying to sell you the jazzy 70's microphone-in-box combo along with a giant price tag - because they believe it was made in the 50's.

When manufacturers started rolling out solid-state Sideband radios Turner added another desk microphone to their line: the Sidekick 100, followed by the Super Sidekick microphones. Unlike the +3, which offered amplification plus a speech compression circuit, the Super Sidekick was strictly an amplified desk mike. It had a sharper, less bassy sound that worked great on AM but especially on single-sideband (I'm pretty sure we all know that a +3 sounds very good on SSB as well. Often, a lot of how you sound depends on your voice characteristics and the radio itself).

In the very beginning, the microphone was called the Sidekick 100 and other than a label with Sidekick 100 on the mic it looked exactly like a Super Sidekick. After digging around the Internet I came to the conclusion that one predated the other briefly but it wasn't for very long (I've seen advertising with both microphones in the same year). The Sidekick 100 disappeared leaving the Super Sidekick to carry on. I compared a Sidekick 100 pcb with a Super Sidekick and they appear identical, but I don't know of any differences other than the name (does anyone know if there was a different element?)

Another anomaly has to do with the internal PCB and the adjustment POT [which is underneath the base-plate and accessed thru a small hole in the plate].

While all of the Super Sidekick's I've seen have the adjustment hole, not all of them have the POT on the PCB to adjust (I ran across this between two Sidekick 100's as well). Weird.

If you're on Facebook, there's a group devoted to Turner Microphones, which you can find HERE

BATTERIES ARE STILL AVAILABLE FOR THE OLDER MICROPHONES

If you're not familiar with them, the CB Tricks website has a plethora of knowledge on just about everything CB, including microphones. CB Tricks Turner Page.

Almost 20 years ago Tom wrote a great article for the CB Gazette. It was about the Turner Microphone company and their history between 1952 and when the plant closed in the later 70's. I re-published his story on this Blog in 2009 - You would be doing yourself a disservice in not reading it (Thanks Tom!). Link HERE. 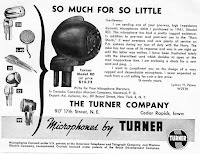 A good website to learn more about older microphones!

Turner mics of the seventies


+2 DESK MIC PLUS A FREE LIGHTER 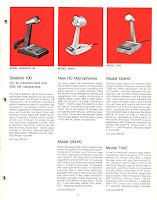 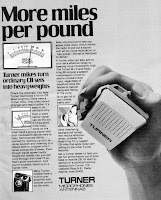 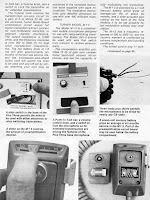 
There you have it, everything I know about Turner Microphones. If I missed something let me know. If I got something incorrect, Ditto. As well, if I find additional material that I might have missed (ad's, pictures, etc.) I will edit this Blog post. I hope you leave here with a better understanding of this fine company's history -