"IF I WERE TO ASK....."
-
"What rig would you pick for the longest running popular HAM/FREEBAND/ILLEGAL CB?"
-
"What would you pick?"
-
I got this idea for an article while perusing one of the radio boards on the Internet and there's always someone who will ask "What's your favorite rig(s)?" from time-to-time, and today was no exception. While I have a fairly staple list of favorites, I already knew which one I would pick if I asked myself the question above. Can you guess which one? Or maybe one rig in particular just leaps to the forefront of your radio selections?
-
Keep in mind the criteria:

My pick (Drum roll please....) is the Yaesu FT-101 line. I can't remember how many of these I've owned throughout the years, but I do know that every now and then I get the itch to buy another

one, and believe me, there are a bunch on the market! One curious aspect of the 101 series is that the price has more-or-less remained the same for the last 20+ years (usually you'll find them in the $300-$450 range), and of course there is the loyalty factor: FT-101 owners are very loyal to the 101 series. It still amazes me how many 101's still have the "Plastic on the faceplate" - the worn, discolored, "Badge of Courage" of the 101 owner (and I've seen some pretty nasty plastic; especially ones used by smokers).

So why do so many people like the 101? I suppose, many years ago, it was the 11m position on the band switch, or maybe it was the "LOOK". It sure wasn't the weight because the FT-101 is one heavy sucker for a rig with a carrying handle! For me, I think it was the simplicity of being "Analog", but whatever it was, the FT-101 began my affair with Yaesu equipment, and it was by accident (er, I meant to say "Act of God")!

My first HAM rig (a Heathkit HW-5400) was damaged by a nearby lightning strike. Naturally, I took it to the "Fiddler" for repair, and he offered to loan me a 101.

"It's not as modern as your Heathkit", he said, "Maybe 10 years older"

I was still working on getting my code speed up to 13wpm, and didn't want a lapse of time to slow me down, so I agreed and drove up to his shop to pick up the loaner. When I first laid eyes on it, the connection was made! And after the Fiddler showed me how to tune it (it was my first tube HAM rig), I couldn't wait to get it home and try it out. All I can say is that it was the coolest rig I'd ever seen!

Since then, I've owned the 101, B, E, EE, and EX models, many were complete sets with matching accessories. One accessory,

considered a must by many is the YC-601 digital display, of which I've owned several. But the "Cool" factor for me was operating without the digital display, which added to the mystique of running an analog rig with an analog display. Gone were any preconceptions of channels, or 5 or 10khz steps - you had a starting point and an ending point, with everything inbetween ready for exploration.

The analog calibration kept you aware of band plan limits - so you knew when you had moved from the CW to the PHONE band, but otherwise, the 101 seemed to bring you back to the days of "Flying Blind", knowing where you were, but

not exactly where. Would the next turn of the dial bring a contact? or would you be mesmorized by the hiss coming through the speaker and sit tight? If HF wasn't enough, then you could go buy a 2m or 6m transverter (or BOTH!! They all matched).

If you are really into 101's then I suggest that you

checkout a great website (click on photo) that will give you anything you ever wanted to know about FT-101's, and then some! NW2M put a lot of work into his homage to the 101 series, complete with history, spec's, comparisons, and much-much more.....

"There is nothing like the glow of a tube rig, in the shack with the lights out!"

The rig to the right is a Yaesu...can you determine which one it is? My guess is that it would be pretty hard to figure out...(HINT: It's a Yaesu....oh yeah, I already said that)

So, the 101 started my love affair with Yaesu. Inbetween various "Flavors" of the FT-101, I also owned:

But I always came back to the 101, and the 101 was always the same price range. I'm not saying I didn't like other Brands, for instance an Icom IC-751A was a favorite of mine - it had a GREAT noise blanker, as well as the IC-738, and I still have a 703 in a backpack for QRP operations. But if you look back when the 101's first came out, and compare them to a Kenwood or Icom rig from the same period, I don't believe you'll find as many of the others. Maybe Yaesu sold more to 11m op's....

FROM: THE "MAIL BAG"

DAVE H. wrote in after my last column to remind me that not all operators are DX Hunters, and I'd have to agree with him. After reading my previous post, I could see where I was a little one-sided, and there are two sides to every situation. Like Dave, I prefer the local round table of discussion, but there aren't many local sideband users in my neck of the woods.

So, while everyone isn't selling their rig's, there is some portion that do during low sunspots. I've also found that mid-July through the end of August is a good time to look for a "DEAL" from a desperate HAM-SALE. I think this has to do with the new school year about to begin, and kids asking for a new computer or laptop....or it could just be a coincidence, I just know the best prices are found during that period. In New England, where I grew up with 11meters, things were a bit different: An extra rig or other equipment was sold in the Spring, as outdoor activities would keep you from yakking too much on the radio, but come the end of summer and into Fall, anyone who was short a rig, made sure they had one because winter could be very long.

Since your getting more photos of 11 Meter HT's, here are a few of mine. 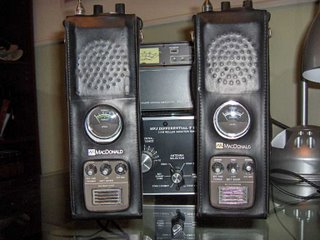 These are McDonald Instruments Model 06-32-75 manufactured in September 1978. They are 5 watt 6 channel radios. The receivers work very well and I have made several contacts standing in the back yard. They are 11 3/4 inches tall, weigh about 5 lbs with the 9 AA batteries installed, and proudly display a 46 inch telescoping antenna. Cool . . . . .

Well so much for this column - Woody