"WHERE HAVE ALL THE GREAT MIKES GONE?"
-
It's like a bad movie ("The Grinch that Stole the Manufacturers") when I think about it - what happened to all of our favorite manufacturers? Of course I know what happened- they were bought by another company and in some cases, that company merged with another company that was later bought by another company and the bottom line ruled over creative design and quality control.
-
Yes, TELEX has a few Turner handheld models available (or is it one model available?), and YES, Astatic wh

o was bought out, still offers hand microphones, packaged in plastic; some, in just about any color you want. But where are the classic Plus 3's, Sidekicks, 254's, D104's, etc.? I'm not necessarily talking those specific microphones, but more the spirit of the design that went into making those microphones (a microphone you'd be proud to have on the radio desk in the shack). Thanks to EBAY, you can still pick up the older ones, sometimes still New-in-the-box, but why aren't they still in production today?
- 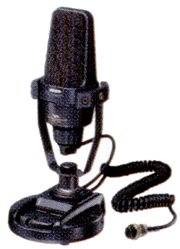 Manufacturing costs are one (NO, I don't want to buy a crappy piece of junk from CHINA), and maybe perceived market share another, but if nice looking, quality microphones weren't desired, then why is HEIL doing so well? Why do operators pay for the Yaesu MD-200A8X microphone if style and quality isn't still marketable at a higher price?
-
What I see are people paying $100-$200 for a D-104 "Night Eagle" because ASTATIC doesn't make them anymore. I see TURNER Plus 3's NOS going for up to $100, along with "Super Sidekicks", "CS-1's", etc.
-
What I don't ever expect to see is someone paying BIG $$$ for the "Anniversary Edition" Diesel echo mike, or the Golden Edition Barjan "Super Bubba", it's just not going to happen (but then I'm the guy who said that "Rap music sucked" and would never be popular). Can you imagine an Ebay auction 10 years from now?
-
"ASTATIC D104m6, with original shredded, and cracked plastic container"
-
If TELEX had any brains, they'd come out with a limited edition "CLASSIC SERIES" of microphones, not just the CB series, but go back to the 40's and 50's styles, only with upgraded cartridges that would work well with todays rigs....
-
That's how I see it, so 'Nuff Said
Woody
-
Posted by The Stoner Guy at 2:01 AM