Man, what a crappy 1.5 weeks!!! Servers can be your best friend, or worst enemy, and currently one server in particular is my worst enemy. I'm running here and there in our building, skipping lunch, etc. But once everything settles down, I have plenty of other stuff sitting here waiting to be done (ed. - Such is the life of an IT Monkey).

When payday hits next week the first thing I'm doing is getting my old SOW (Shack On Wheels) towed to a faraway parking spot at work. I'd been counting on getting it over 300k but I guess I'll have to settle around 240k miles. Too bad, good spots to plant rigs, and I liked it, but after getting an estimate I had to say "Adios". GM makes a good engine, but that GM Antifreeze is like a computer virus. My advice, get your system flushed out until nothing remains of that stuff and put good old Mr. Green in as your coolant or else you'll be in the spot I was.-

And while we're (I'm) on the subject of cars, why do people have to get a new car/truck every couple years? I get around 250k to 350k before looking for something else. Once that first scratch or ding happens, it's keep it 'til it dies. My favorite SOW was a Maroon Van. It had the deluxe chairs, room to mount radios on the floor, and I bought a shelf that extended across the width of the windshield. Not a lot of height up there, but the vhf/UHF stuff fit nicely. I was going to Belton twice a year and I remember one particular year where I bought an old tube receiver that was big, and took 3 of us to get it in the van. Good times....Good times.

I received a new AES catalog earlier this month, but it's still in the wrapper along with the last couple of unread QST's. There doesn't seem to be time to do much except go home, watch a 1/2 hour of TV or spend 1/2 hour surfing the web, eat, get the next days work clothes ready, and hit the sack. Sometimes I'll stop by the local Walmart to see what DVD's they've added to the $5 bin, and it's amazing how cheap they keep going. Of course Blue-Ray is perhaps pushing the pricing down, but they're already working on B.Ray's replacement - it's almost worse (I said "almost" ) than Microsoft. DVD's are the best bargain around, and with the up conversion, they look great. Maybe when this Divorce is over I can replace some of the movies I paid $16.99 for, at a much lower price range $3-$5.

Speaking of USB Storage sticks (which I wasn't) I found a great little bugger by Transcend. It's so small, it looks like a joke or fake memory stick but it works great. They come in 2GB (black) and 4(GB) sizes, and for me, it's great to have clipped on a loop around my neck and It has most applications I would have to run back to my 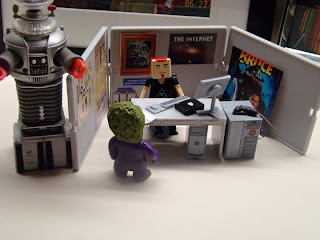 office for. Being so light of weight, I don't even notice it. If you have one of those small picture screens that shows off pictures, with this tiny stick you can't see it sticking out of the frame. Of course I have a great state-of-the-art cubicle as you can see! My trusty robot guards over me should an end user's requests exceed the budget, or if they threaten me with a paper cut. He's small but on the server at the right side of the desk you can barely make out my pet rat, "Ben". Hmmm, guess I'd better cut this post short as auto-save is failing. Anyways, until next time -
-
73
Woody
-
Posted by The Stoner Guy at 4:52 PM