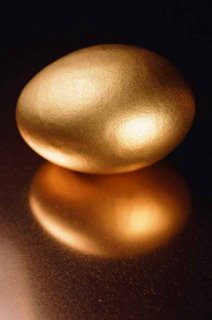 THEY WON'T KILL THE CHICKEN
(THAT LAID THE GOLDEN EGG)
-
Ok, the fable is about a goose, but as CB is referred to many times as the "Chicken Band", I made a slight change. So....you're wondering: "What da heck is Woody talking about?" (ED.- while others, who have read some of my older stuff probably know where I'm going)
-
What I'm talking about is the constant questions of: Why are export radios sold in the U.S., why don't they just shut down H&Y/Copper, etc. The answer (IMHO) is simply economics. Yes this stuff is illegal for use in the U.S. but if they shut them down, they'd lose all the money they'd fine them in future busts. If you've been around the dial as long as I have you tend to notice patterns, and the pattern I see here is:

This has been going on for decades now. If they REALLY wanted to close 'em down - they could. But what the hey, by sticking to this pattern they bring in big bux from distributor busts, and many mini-bux from operators, not to mention the medium bux from dealer busts. As long as they stick to this formula, it's a consistent revenue gain for the government, with really little footwork having to be done in order to get evidence (i.e. - pick up the phone and order a free catalog, or, buy an export rig or amplifier).

Sure I've simplified things, but there is a method to their madness. Me? I have no problems with anyone talking between 27.415-27.555, but as for operators (ignorant or not) taking up Amateur Radio bandwidth - Nope, the buck stops there. Truckers with export rigs and/or amplifiers? If ya see 'em, take 'em away. And I know we've lost this battle in our school systems, but it would be nice if there were a rule that said you had to communicate in English.