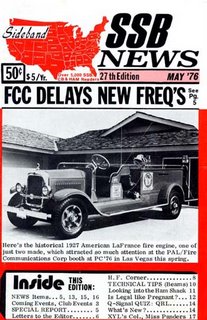 We've all seen S9 and CB Radio Magazine, even CB Horizons - But these were the "BIG DOGS" of CB Publishing, what about the little guy? In many instances small Newsletters, or Mini-Magazines sprung up within their area, or tried to go National (as I did with the CB Gazette). But long before my Gazette, back in the 70's, the "SSB NEWS" popped up: at first in the small format (like the small S9), later in the larger format (like the large S9).
It had more advertisements than articles, but it did occasionally make for interesting reading. If you are a collector of this sort of media then you should at least own a few examples of each size. I don't have any information on when it began or ended, so if you happen to know, please let me know! -
________________
-
FROM THE "WHAT THE HECK DEPT."
-

If you recall from several post's ago (unless you're having a senior moment) I was talking about shipping/packing and the tale of 2 FT-101B's I received. I had both rigs sitting side-by-side on the bench for sometime when I noticed that one of the 101B's had a brown and silver logo, as compared to the other one with the standard black and silver. It caught my attention because I'd never seen a brown and silver logo - in all my years of various FT-101 ownership, this was the first. So I'll put this question out to you - "Do you know what the brown'n silver means?" (other than "They were out of black") If you know, e-mail me! 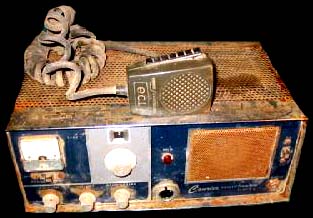 Some people would say that when you turn 50, it's all over with - much like the photo to the right, where rust has taken over the old rig and is slowly dragging it down until one day it finds itself in a landfill somewhere.

This week I will turn 50, but unlike the rusty rig, I'm not ready for the landfill, because as my mom often told me: "You were born old". Looking back at my early days in radio, I think it's true - I was a 13 year old kid that felt more comfortable yakking with the Geezers than my own age group, and could compare rigs and their specifications with the best of them, and if you count my initial break into radio with walkie-talkies and a shortwave radio kit, Radios and I have been together 40 of these 50 years

, and radio has a lot to do with how young i feel (aging only between sunspot cycles) - so I guess I feel more like the rig to the left, than 'ol Rusty, above...

I consider myself fortunate to have seen some exciting things come our way, like:

Sure, I've forgotten a few others, but really when you think about it, I got to experience quite a few innovations, and who knows what's to come? As for the BIG FIVE-OH, well, it just brings me closer to the next skip cycle!

So to wrap it up, it's been a good 50 years, and I have plenty of rigs and accessories that bring back good memories! So for now.....