MONTY PYTHON'S
FLYING CIRCUS
(The Lost Interview)
-
From a Dallas PBS station interview in 1975 and once again, thanks to a link found off Boing-Boing, it's an interested time capsule that actually had the last 15 minutes recorded over as you'll find out if you watch the interview.

_________________________
-
DOCTORS PONDER ABOUT
REAR-END REPLACEMENT SURGERY
-
MARCH 26, 2006 - It's a known fact that overused parts of the body are prone to failure. Most recent examples can be found with Jeff Bagwell, whose shoulder injury has yet to heal and most probably he will require a shoulder replacement when the season (or his career) ends, and Angela Lansbury who recently had knee replacements, which she attributes to her early dancing career.
-
Now doctors at the M.D. Anderson Medical Center in Houston Texas are looking into rear-end, or "Ass" failures from longtime HAM and CB Radio operators. Doctor Popeil Faraqi has recently completed a test study from both groups and has determined that butt failures are all to common within the Radio Operator ranks, leaving the operator only a few choices, such as standing up while using the radio, or exiting the hobby altogether!
-
Ron Casey, one of the participants of the study had this to say:"I've enjoyed radio communications for several decades, but recently I had to curtail my talk time due to severe pains located in my butt", Ron continued, "If I had to compare it to something it would be like having carpal tunnel in your rear, only alternating between the left and right cheeks".
-
Doctor Faraqi began development for plans of the "Faraqi Butt-Sling"

which would allow the HAM or CB Radio Operator to enjoy his hobby with a minimum of pain, until artificial butt replacements can be developed.
-
"Naturally", Dr. Faraqi said,"A butt replacement is a serious matter - we just can't use any type material. It can't be too hard, or too soft". One of the early prototypes (pictured on the right) was tested by Ham operators a the Dayton Hamfest last year. Feedback from the test indicated that Radio Operators require something more comfortable, due to the long hours they spend sitting in front of their radios. The main complaint seemed to be the strap which ran between the legs, cutting off vital circulation, not to m

ention intense discomfort.
Finally, Faraqi came up with his final version of the butt sling (pictured on the left) which hangs from the ceiling, and has comfortable semi-elastic wide straps, while at the same time allowing the right and left cheeks to hang out, leaving the operator with a temporary fix to the agonizing pain previously encountered.
-
Side effects are minimal: Test subjects were prone to sing "Swing Hi, Swing Lo" or simply to fall asleep. Expect the Faraqi Butt-Sling to hit the market by the 3rd Quarter of 2007.
-
_________________________
- 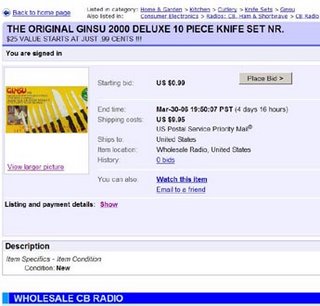 I thought this was a strange item to be listed under CB, and sold by someone who sells CB related gear, but then I got to thinking about it and it finally hit me! These original Ginsu 2000 10pc knives were a "Set for all occasions", in other words - "No coax was to large or too small to cut". Agitators beware.....
-
'Nuff Said,
Woody
-
Posted by The Stoner Guy at 2:01 AM