SNOW.....
-
It Snowed in Houston and most Southern areas on Friday - A very nice time to sit out on the balcony and enjoy it (which is exactly what Robin and I did). Usually the snow hits the northern counties first, but on Friday it was just the opposite....
-
On the local repeater, reports of snow first started well South of our location, and I'd go to the window to look out and see only rain, but soon afterward rain turned into flurries and then into the huge kinda flakes you would see while visiting Boulder Colorado!! Of course it was much more scenic in Colorado, but it was something to see "Boulder" sized flakes falling down in the Sugar Land area!
- 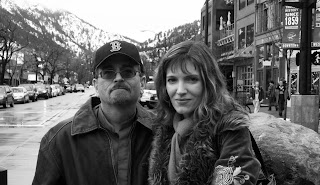 Remember when the old E.F. Johnsons were selling at Hamfest or swapmeets for about $5 and then jumped way up in price? There really was a good reason for the jump because so many were still around, and in good or very good condition. Regardless, people bought them at the higher price. I see this every day whether it's the Johnson, Astatic, or Turner product that was sold in such a quantity that there really isn't a shortage. My latest example is the the lowly Realistic TRC-23/30A AM Base Station from the early 70's. A boatload of these transceivers were sold back then, and even in the beginning of this Century, they were only fetching $5 and shipping (if that much). Today they seem to command a much higher (and crazy) price. As many as there are that get sold, you could multiply that by 20 and still not reach an end zone. It's really puzzling to figure out what is driving the price upwards? (Maybe someone intends to buy each one that come available, and corner the market).
-
"THE SHACK"

Now that Radio Shack has adopted the name "The Shack", and pummeled us with some of the worst holiday commercials ever made, some brain-dead ebay folk are actually selling older rigs with descriptions like "TRC-457 CB Radio from THE SHACK". (ed. -even zombies have more intelligence than these folks, 'Nuff Said)
-
NEXT POSTING: