EVERYTHING YOU'VE WANTED
AND MUCH, MUCH MORE....
--
It's been awhile since I've done a review, and as I perused the many CB listings on Ebay I've noticed, and passed by many of these "Secret CB Manuals and more on CD" auctions. My budget (squirreled away lunch money) was such that this seemed to be a good subject to review. After all, I'm sure many of you had the same questions I had:
How good were the scans?
Did they really have the data as advertised?
Could I read the schematics?
-
The prices of these vary from .99 cents to around $10, so I picked the $10 auction and bought one. 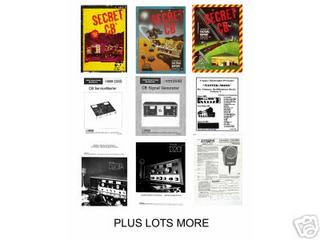 The package arrived fairly fast, and inside I found 2 CD's. I popped in one and looked around, then the second, and indeed, everything they advertised was there. Also, from what I viewed, the scan of the manuals were pretty decent and easy to read. The only problem I really saw was a lack of an easy index, perhaps setup in an HTML format. For example, if I wanted to see what info the Secret CB's had on a Hygain "Hy-range V", it would be nice to have an index listing every mention of that rig, and the Secret CB it was in, along with a hyperlink to get there. Instead, you have to click on a PDF file that is numbered (like the Secret CB's) and spend time poking around it, then moving on to the next PDF file.

On the other CD there are files that have no meaning (at least to me) and you click on it and it opens up and tells you what schematic it is. A bit frustrating, but given the cost of buying the manuals and other schematics and information, ten bucks is a pretty good deal (it could have been done better). 3 1/2 stars out of 5.