My gripe about software fixes/updates is (temporarily) out of my system, and I thought that this would make a perfect time for two reviews which might make an impact on iTune/IPOD owners!
-
First is the recently revealed iTunes 9. I usually hate upgrading to new versions of iTunes as it seems like it always screws sometime up which then I have to fix. But I read a bit about Ver.9 and two of the new features attracted me enough to cross my fingers and click on the download button. The biggest advantage (for me anyways) is group sharing within your household network! I have a fairly beefy PC in one room and a Netbook that Robin bought me in the living room. Knowing how poorly iTunes runs on a PC (it runs on top of Quicktime player), I figured it wouldn't make sense to have it on the Netbook as it would have a hard enough time playing music off it's hard drive while coping with iTunes.
- 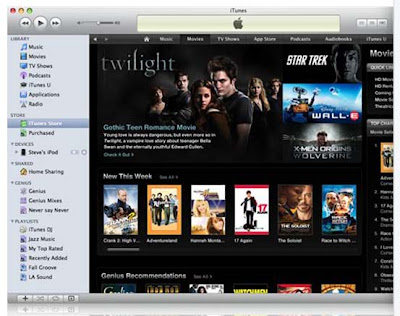 Now, with the new "Sharing" feature, all I have to do is put iTunes on my Netbook, Authorize it, and then pull up my library on the other PC and stream the music to the Netbook! Step one was upgrading my other unit to Ver.9, Step two was installing Ver.9 on the Netbook. After enabling "SHARING" on both units I went into the living room and could see my main PC in the column on the left. Clicking on it gave me the message "Copying Library From Test". This took only a minute or two and then there it was - the library from the other computer displayed on my Netbook! Now the true test: Would the Netbook play the songs without glitches, over my wireless network? Short answer: "YES". I was happy. Now I could be in the living room, doing other things and still play music from my iTunes on my other PC.
-
The second feature I liked was the iTunes Album - you can buy a CD from iTunes and have the experience you used to have with records: Front/Back cover, inside with pictures, liner notes and lyrics. Just like the "Olden Days", only digital. I've yet to try this, but I'll let ya know whether it lives up to it's hype of not.
-
CUCUSOFT
-
With a name like that, you have to wonder if it's a joke or not, but I can truthfully say that, name aside, Cucusoft has a great product! So I bet you're wondering "What the Hell is it?"
-

Cucusoft is a great software package that allows you to convert DVD's to IPOD format, thus allowing you to take advantage of your DVD collection and put some of your favorite movies and/or TV shows onto your IPOD. I Like it for TV shows the best, and like with music, you can create your own playlist of your favorite TV shows and cartoons. Granted, the IPOD screen is small, but it's not THAT bad to watch, and, if you buy one of those inexpensive video cables off AMAZON ($3 and up), it's easy to plug it into your TV - at home, or, on the road. I'd suggest getting the deluxe version which combines their audio and video conversion suites, and it's only $39.95.
-
LAST BUT NOT LEAST
-
You never know what or who you'll run into when your out and about. Just the other night we popped into a favorite place and this is what we saw! 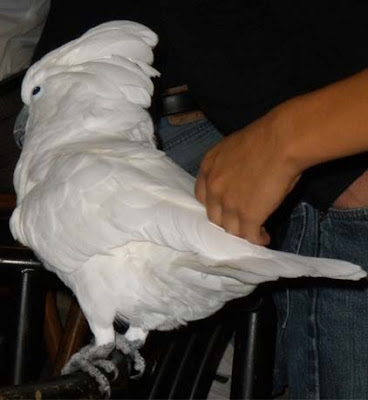 ONE COOL LOOKING BIRD, AND HE HAD A LOT TO SAY