Yep! The dX has been rolling in all day, and tonight it's even stronger than it was earlier. It's weather related skip, so I've only heard some fairly close States, but it's nice typing on the keyboard while listening to Tennessee, Mississippi, Illinois, and Oklahoman fading in and out of the very low noise level. Occasionally they'll hit a Texas station but it seems like their skip is running further North, like Michigan.
One fellow I heard was running a CPI-2000, and that's one rig that I've never owned, or, operated. Funny about those things; I've operated a ton of radios but there's always the oddball that for one reason or another, I've yet to get. 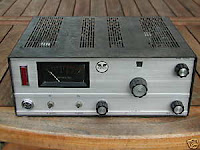 Collectible radios can fetch a good price, but there's an auction for a Browning "Raven" that made me do a double-take at the Buy-It-Now price of $700. I've bought some things from this seller with excellent results, and I know he knows his stuff, but I owned a Raven once and I suppose if you're a Browning collector and want every Browning radio ever made, you'll find the Raven a very hard "Bird" to find. Nonetheless, it's really nothing to look at, doesn't have the Browning "Style", and if I were going to spend $700 on a Browning, it would be a Mark III or IVA to be sure.
Anyways, I'm watching the auction to see what happens, and he does have a "Make an Offer" button, so I'll be curious to see what this radio sells for!
73
-
WOODY