Last night we went out to see the latest Woody Allen film, "Whatever Works". It was a limited release movie, and we weren't sure how long it would hold up at the theatres. From what I've read; 'Whatever Works' is a decades old script that Woody Allen dug up and cast Larry David as his lead character - a "genius" who sees nothing good in mankind or the "inch worms", people who inch along in life and never see the big picture. David not only sees the big picture, but also makes it clear (from the beginning) that he can also see the audience watching the movie.

I'll be the first one to admit that I'm not a huge Woody Allen fan (although as a teen, I went with my friends to see his "Everything You Wanted To Know About Sex - But Was Afraid To Ask" movie) but lately, we've caught a few of his flicks on the tube, and decided that we'd partake in the movie experience once again. 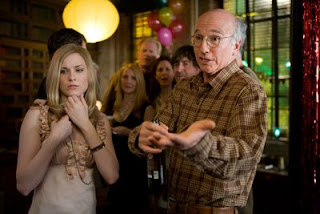 While there appears to be nothing charming about his character, he manages to marry a young woman who picks up on his type of thinking very quickly. Some of the funniest moments are when she is with someone else, and starts throwing out things that seem normal to her, but only because she is with David's character. 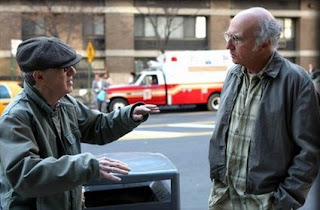 Much to our surprise, we had the entire theatre to ourselves, so this felt much like a "Private Screening", and the times we laughed we knew were funny, as opposed to a theatre full of contagious laughing patrons that affect you much like someone who yawns in front of you...heck, just thinking of yawning is making me want to do it as I type. This isn't a movie for everyone, especially those cellphone texting youthful idiots that make going to a movie a nightmare, but we enjoyed it, and it's on our list of one of the better movies we've seen this year. Perhaps the biggest plus - Woody Allen isn't in it. If he were, this would not be the movie it is - I'd say, if you catch an early showing and only have to shell out $5 to go see it, then "Whatever Works" is worth it. If not, make a note to find it at your local Blockbuster whenever it comes out on DVD.