"DEAD SNOW...."
I like Zombie movies and I like games where you kill Nazi's, so it came to no surprise that I'd like "Dead Snow", a Nazi Zombie movie!! Filmed in Norway and in their native language with English subtitles, it seemed like a winner (after viewing the movie trailer). It takes place during the winter, on top of a mountain, and of course, a bunch of goofy young people. 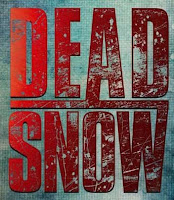 The production quality is very good, and I have to say that the Nazi Zombies are so good that they really creep me out! These Zombies are unlike the typical Zombies and seem to have a good thought process. There are some laughs (of course) and one scene that is rather disgusting, but over all it's one of the better Zombie movies out there.

It's currently available via "ON DEMAND" and I have to point out one disappointing fact regarding this version - rather than have it in their native language, the ON DEMAND version is dubbed in English - totally disgusting. Soon, the original film w/o dubbing will make it's way into the market and I'm waiting for that one. 3.5 stars outta 5.