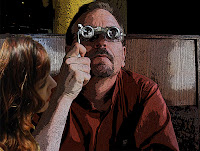 IT'S A THIN LINE BETWEEN COLLECTING AND BEING A
"HOARDER"
-


Looking back, and especially after seeing the A&E TV Show "Hoarders" I can't help but to think back and realize that there were early warnings signs that I was going to marry a "Hoarder". Not that I'd heard of that precise term applied to the situation, but nonetheless, there it was.
-
My first hint came when I visited her former boyfriends apartment (shortly after they had split up after a miscarriage) and there was "STUFF" everywhere. I remember vaguely hearing him mention that she was a bit of a procrastinator and had trouble organizing things, but like I just wrote - it was a vague memory. A year or so later when I started seeing her, she was always in the middle of cleaning the house (she had moved back with her mother, sister, and brother), complaining about how hard she tried to keep things in order. She would point out her sisters room and have me look inside, all the time telling me what a slob she was.
-
She was a very good cook, and it impressed me that immediately after dinner she would start washing dishes and telling me how much she liked a clean kitchen. I guess that's how I was sucked into the "act". Sure, I had my sloppy periods.However I liked to vacuum the floor and at the least, be able to have the house I was in at the time, presentable within 15 minutes notice of visitors. It became clear that if we were to see each other at all after marriage I would have to move to Sealy. although I really loved that little house, as did my kids, and my mom. But, move I did, and for a brief time the place was relatively roomy and clean. It didn't take long for stacks and stacks of newspapers to appear ("I still have to go through these to see if anything is worth saving" was the logic), and this, was only the beginning.....
-
I'm ending the part here, as the story is a long one which gets much worse, and I don't plan on writing about it everyday, after all, this is a RADIO blog, but I'll keep going when the mood strikes me).