"R.M." wrote me the other day asking "What about "Johnson's", I thought they were popular", and so I figured it had to do with the website end of things, who knows, maybe something got screwed up (it's been awhile since I've done anything on it). That's when I remembered, he was probably looking under my A-Z list and didn't see anything under "J".

Of course, it's the E.F.Johnson Corp. and even I forget that sometimes. So I replied and and pointed out where the pictures I had were and mentioned that I was honest-to-GOD going to update the site with more pictures. This also got me strolling down memory lane, and why some of us collect.... 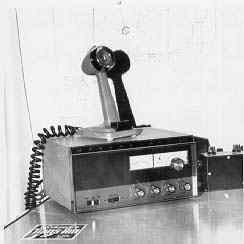 MY FIRST E.F. JOHNSON (124) - GREAT RIG!!
-
My first Johnson was the Messenger 124 Base-Station rig with a BIG meter, minimal amount of "Bling" and one hell of an adjacent channel rejection. I have one sitting to the right of my desk at this moment, and every time I look at it, memories come flooding back in.....THAT'S why I collect. As I approached driving age my 2 choices were the E.F.J. 123, or 323 - somehow the simplicity combined with quality just pulled me towards them. I think I liked the 123 better for some reason.
-
But when it came down to picking my perfect mobile (and by that time I was into SSB), there could be no other choice than the Viking 352. It was the coolest rig I'd ever had in a car (and the car I had it in was a 1976 MG Midget; not a lot of space). I had one, maybe two, but the Vultroll (the ex) has them now. Nonetheless, just seeing a picture of it gives me some great DX memories that I wish I had recorded!! I don't know why they put the microphone connector on the back of most of their transceivers, but it was sure annoying - especially running mobile. When the 4740 (352 w/40ch) came out I felt sure that it would be corrected, but sadly I found that it too connected to the rear of the rig, although I finally found one on Ebay that had been modified with the microphone connector on the front
=
But that's why I collect - instant memories! What about you? For the same reason? or perhaps to get a rig you always wanted but couldn't afford back then (ed. - "Guilty"). I guess this kinda ties in with that thin boarder line of collecting and being a "HOARDER", but that wasn't the reason I wrote this post, it was thanks to "R.M.'s" email that got me thinking backwards in time....
-
WOODY
-
Posted by The Stoner Guy at 12:27 AM