THE "RODNEY DANGERFIELD"
-
OF RADIOS.....
-
-
Everyone has their own opinion as to which brand of radio they believe "Got no respect", and in my case it was the Radio Shacks "Realistic" line of CB radios. In my small part of the country back in New England if you went to a chain store for a rig, well, you went to Lafayette. If you owned a Rat Shack rig, well....you just lied about it over-the-air.

-
My first exposure to them was when I bought a Realistic TRC-23B. Everyone - and I mean EVERYONE, gave me "Tin Can" sounding audio reports, and I could even hear it when I transmitted off a dummy load and received my audio on another rig. I can't tell you how many hours, days, weeks, and even months I spent trying to improve the audio quality. From home-made microphone FET Pre-amp circuits with tone control, to just about any microphone I could afford, this was my "windmill" and dammit - I was going to win. I never did; and I always felt sorry for others who bought the same rig because I could spot the high pitched nasal quality that mine had in and instant.
-
No

w, they did have a TRC-59 which was much more normal, even adding a pleasing BASS quality to the sound, but it was outta my money cache. I did like their styling of both walkie-talkies and transceivers though, and through some trade of misc. "Stuff", I also owned a TRC-100b walkie-talkie. It as GREAT! Great looking, great sounding, and 5 watts of power in my hand. If I recall, it used the same DIN connector as their big brothers did for the microphone so I had plenty to choose from.
-
Seriously though, "Rat Shack" had just as good of a product as of their competitors during the 70's and very early 80's. Yes, they were over priced so you'd have to wait for a sale for all things to be equal, but below are some pictures of some of their classics, ending sadly, where most manufacturers did - in low quality, cheap looking units.

MOST OF THESE ARE STILL WORKING AND WORKING WELL!!! 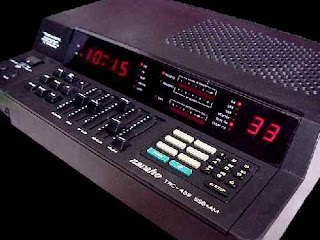 THESE TWO (ABOVE/BELOW) WERE PROBABLY THE LAST OF THE BEST 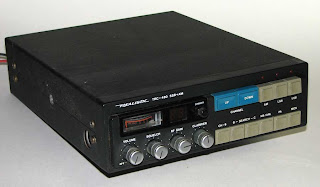 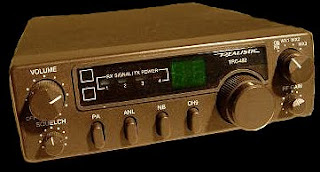 THE BEGINNING OF THE "SUCK" ERA
-
AND YA KNOW I CAN'T END THIS W/O SOME MORE DIVORCE JOKES!!!
“Any man daring enough to marry the VulTroll receives two rings: first the wedding ring, then comes the suffer-ring.”
-
One day in 2003 Woody visited a Wizard (who happened to be in town for the Hamfest) and asked him if he could remove a curse he had been living with for the last 10 years. The Wizard said, "Perhaps, but you must tell me the exact words that were used to put this curse on you." Woody replied without hesitation, "I now pronounce you man and wife."
-
73
-
WOODY
Posted by The Stoner Guy at 6:42 AM