My Son Chris came over last weekend and we spent most of the day together messing around with his new Netbook and his wife's Trojan laden notebook (of course we had time to talk and watch a couple flix while we were doing it). It was good to see him again, and you'd think that living in the same "Houston Area" it wouldn't be so hard, but he works hard and often late, and it's about a 60 minute trip from point Chris to point Dad (and that's if traffic is good). That's the suck part of Houston - it's just too spread out. 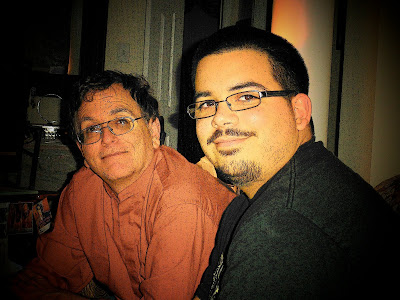 ME AND CHRIS TAKING A PICTURE BREAK WHEN ROBIN CAME HOME

We saw him and his wife last night at Houston's first frightfest of sorts in 15 years called the "Crypticon Houston 2009", but we had made the rounds many times so by the time they arrived we were ready to go (but we did hang around for a bit). As far as the Crypticon went, well, I think it was very poorly advertised, and while they had a few 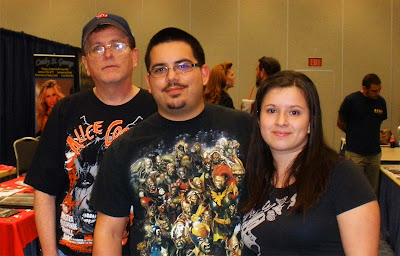 actors (maybe 8) to sign stuff, the dealer support was terrible (and that's a large part of why you go - to look at all the cool stuff). Places in Houston I expected to have booths weren't even there. They had free movies playing in another room, but we came at an awkward time, so it would have meant an hour of waiting before the next one started. Others things missing: people (not many there), and people dressed up as their favorite horror film character. Hopefully today will bring more people and perhaps next year it will be better next year (if they can beat the Houston curse). If you're not familiar with the curse, it applies to Hamfests as well. For some reason, people just don't come out to support these events, so you end up driving to Dallas, Austin, Belton, etc. for a decent, enjoyable experience.

-
SPACE WARP TO TECH SUBJECTS
-
I used to read John Dvorak's columns every week or so religiously, but things building up to the final divorce, and some other issues set me behind in my reading pace. This morning I got up early and spent about 45 minutes catching up on his musings, knowing that I'd see an article about their big "CLOUD" bust recently that left T-mobile users without their data (address/phone book, etc.). It was there and as usual, John called the shots correctly.
-
There were a few other articles that amused me - 1. Regarding the "rats nest" of cables that never seem to go away (although it's been promised for years), and as I read this piece I couldn't help but look down at my floor because I knew all too well what he was talking about. He wrote that he wished that manufacturers would come out with common cables, for instance:

Definitely a good idea. He also mentioned all of those AC adapters plugged into various power strips and I think there's a LOT of room for improvement there. These block-like black juggernauts come in so many different physical sizes that it's impossible to fit them all on one strip. Looking at the specs of each one (DC/AMP output), they're all fairly close and so the various manufacturers should agree to agree on one adapter that puts out what is needed, with a standard connector at the other end to plug into the device. This would take a little time to accomplish, but if they manufacture their items, whatever they may be (USB HUBS, SWITCHES..) they would all use the same voltage/ amperage, and connector type. This would require one large adapter with many connections to plug optional cables into for whatever devices are added, but it would make things easier when a year or so later passes and you find a bunch of adapters that plug into nothing, and then scratching your head and wondering "What the HELL was this one for?", or worse, having a use for a device you've put away in a drawer and realizing that the adapter isn't with it. OH-THE-HORROR of that experience (ed. - More horror than a 2009 Houston Crypticon, 'Nuff Said).

IF you are lucky, the device will have voltage and amp requirements on it, but I've run across many that don't so I find myself on the manufacturers website, trying to find this older device and it's specifications. Sometimes I'm lucky, sometimes I'm not, and when I'm not I turn to GOOGLE (yeah, I said GOOGLE, not "BING") to find some obscure site with the information that I need. Having done this, it's time to search my box of black boxes and try and find one with the correct voltage and amperage, as well as the proper connector to plug it into the device!! What a nightmare, and how easy it would be if they could just agree on a standard. Once a standard is agreed upon then it makes it really easy; for us as well as the manufacturers. They no longer have to supply AC adapters with their product because who needs a half dozen of the same thing? Packaging would be smaller, lighter, and the end user would be able to buy ONE adapter (online or locally) and that would be that.

Another subject mentioned was about digital cameras, and I agree completely. I have a larger D-SLR that I use for somethings, but Robin's little Olympus camera (which fits nicely in a pocket, or purse) is our usual "GO-TO" camera. At 8mp, it take wonderful shots that we've blown up to 11 x 14 and have been perfectly happy with. It has a digital movie function with a good microphone which comes in very handy at times, OH! and it's low-light focus/flash is fantastic! I'm thinking of getting one myself just to have in the truck for those impromptu times where you wish you had a camera, or video camera with you when passing by a pack of Zombies staggering across a field.

When I was using 35mm SLR's, I had a bunch of NIKON gear. The cameras were tough and the optics superb. I would then pick the type of film I wanted for the color or black and white style that I wanted. One of my first digital cameras was an Olympus SLR (non-interchangeable lens) that was just under 1mp, but compared to the more expensive 1.5mp cameras, mine usually won when the final print came out. They had really done a good job in creating a picture where the colors looked like they should. And that's a crucial difference between digital cameras, they are very similar to the nuances between various film types (Fuji, Kodak, Afga) where one film would lean towards better greens, or another with a warmer tone. Several years later I upgraded to a small Nikon and (sad to say) I was really disappointed with the pictures it took, so I passed on the big format Nikon/Canons and went direct to the Olympus 4/3's system SLR when I decided to purchase a digital SLR w/interchangeable lenses and once again, I've never been happier with my camera, and BTW, OLYMPUS optics are superb as well.

So, another week without seeing spots - Sunspots that is. We've had several fronts come through which usually gives you some DX while it's on the way towards us, and then again behind us, but it's been really subpar and rather depressing. Sometimes I wonder "Will the Sunspot cycle even return". Once again, I've read that the West coast has had some DX, but otherwise it seems pretty quiet. So, my mission to install a mobile setup in the Explorer keeps getting put back. I have picked up antenna connections, cables, mounts - so those parts are ready to go, but I still haven't figured out the best way to install the radios. Now my Son's truck is P-E-R-F-E-C-T. When he came over with the notebooks that Saturday I got my first look at it and when he opened the door, unstoppable drool began to flow as I saw plenty of floor space to mount a stack of rigs!

Other things that I've been doing: Well, yesterday Robin and I went to a wedding of a mutual friend of ours, and it was excellent! Hopefully today will be a day of relaxation (and no DX). I'm working on a non IT related project of my own which I'll drop some hints here and there as I progress, we have October pretty muched booked up every weekend so November will be a nice break. Ebay is still screwey, and while looking at various auctions I don't know whether to laugh or just wonder what kinda IQ the seller has.

Lately, my most frequent gripe is when someone lists "CB RADIO" with a burry picture so you can't determine what model it is. Usually the description is: "Look at the picture to see what you're getting. Any questions, feel free to ask". The least they could do would be to tell you the brand, model number, number of channels, what or what not comes with it, and if it works. This leads to another pet peave: While a mobile might be harder to test (unless it's pictured with a cigarette connector), many Base Station auctions give you nothing. If you see an AC cord in the picture you have to ask them: